Energy Company At Odds With County Over Safety Of Wind Turbines

By Jack Spencer | Dec. 13, 2013
A 476 foot tall windmill stands 1,139 feet from the Shineldecker house in Riverton Township in Mason County. 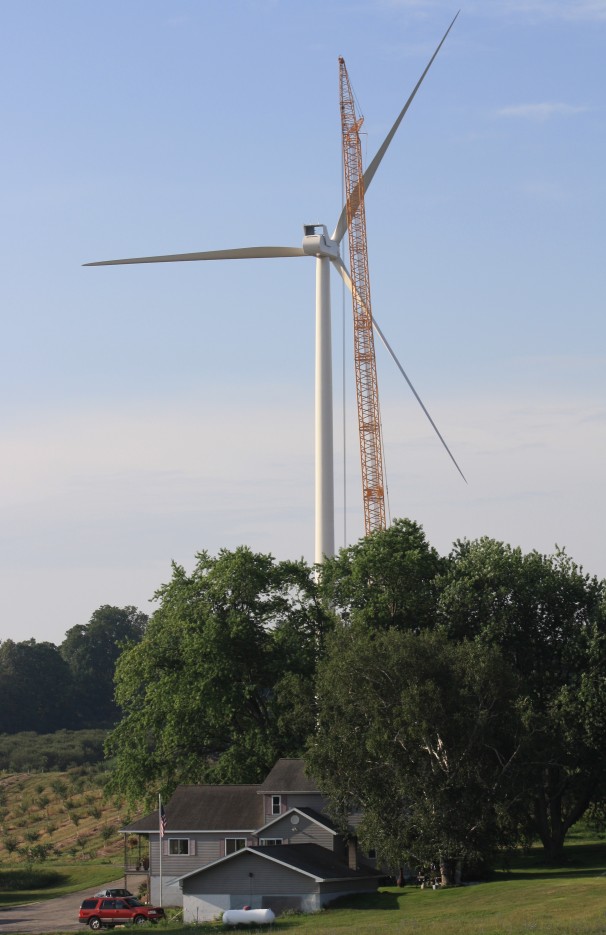 Local officials and Consumers Energy are at odds over whether a wind plant located south of Ludington meets safety standards.

Those living close to the wind plant continue to be exposed daily to the turbines and their apparent negative impact on health and quality of life.

Allegations that Lake Winds Energy Plant has significant safety issues are not new. On April 1, area residents filed a lawsuit claiming noise, vibrations and flickering lights generated by the 56 turbine facility are adversely impacting their health. Dizziness, sleeplessness and headaches are among the symptoms noted in the lawsuit.

Less than six months later, on Sept. 12, Mason County’s Planning Commission determined that the wind plant is not in compliance with safety guidelines. That decision is being appealed to the Mason County Board of Appeals by Consumers Energy, which has a huge investment in the $250 million wind facility.

Two separate reviews support the planning commission’s contention that the wind plant is out of compliance.

One study was conducted by Rand Acoustics of New Brunswick, Maine, in June 2011, which was more than a year before the wind plant went into operation. It was prepared at the request of Cary Shineldecker, who lives near the wind farm with his family. Shineldecker is now among the Mason County residents involved in the lawsuit. He and his wife said they sleep in the basement of their house to escape from the turbine noise.

Based on a review of Lake Wind Energy Park documentation and his experience and training, Robert Rand, of Rand Acoustics, made predictions about would happen at the facility once it started up, if the plans for project weren’t altered. Those predictions were that the wind plant:

“People respond to noise levels when they increase above what’s normal,” Rand said. “In a rural setting, people are used to about 20 decibels of background noise at night. So the bottom line is that when the turbine noise comes in at 40 or 45, you’re going to have a significant portion of people complaining. This is well-known … it’s established.”

After seeing Rand’s review, the Mason County Planning Board reduced the maximum noise level for the project to 40 decibels. However, Consumers Energy objected to the lower level and convinced the board to change it back to 45.

Kevon Martis, director of the Interstate Informed Citizen’s Coalition, said he thought the reason the utility company wanted the limit at 45 was because at 40 decibels the wind plant would be too inefficient.

“Michigan’s population density is too high for wind power,” Martis said. “The only way you can build wind power in Michigan is to inflict harmful noise levels on people.”

In his review, Rand found that the wind plant was designed with no margin of error, which would virtually guarantee that the turbines would periodically exceed even the 45 decibel minimum. His review concluded: “The likelihood of the proposed facility exceeding the existing sound limits at multiple locations on a regular basis is beyond question.”

Rand said as many as a quarter of the people within a certain area near the turbines are probably suffering ill effects because of the noise level.

“When one or two people complain, they are really representing many others,” Rand said. “Some people won’t complain because someone in their family may be involved with the project, things like that. Also, when these projects get started wind developers go around and get people to sign ‘hold-harmless’ agreements. They accept money ahead of time not to complain. Of course when they do that they don’t really know what they’re going to be dealing with.”

HGC Engineering of Mississauga, Ontario, was then brought in to do a review and reported that the wind turbines were in “general compliance with sound level criteria.” This conclusion was not helpful to Consumers Energy or Tech Environmental, the firm that did the acoustical assessment for the wind plant. The reason it wasn’t helpful was that if the wind plant was only in “general compliance,” that meant at times it was out of compliance.

In a Nov. 7, letter to Mary Reilly, zoning and building director of Mason County, Brian Howe of HGC Engineering, stated that the wind plant is not fully in compliance with the Mason County sound limits and the wind plant design did not have a sufficient safety margin.

Howe wrote: “As the County is expecting that the 45 [decibel] criteria should not be exceeded by the sound due solely to the turbines in any 10 minute period, then I can assure the County that competent, material and substantive evidence supports the conclusion that the turbines are not in compliance at certain residences on occasion.”

Rand, whose profession takes him from coast to coast, said wind plants are causing similar health and annoyance problems throughout the nation.

“The problems are all the result of putting large industrial wind turbines too close to where people live,” Rand said. “The only real solution to the noise problem is distance. Turbines have to be placed where they won’t do harm to people.”

Brian Wheeler, spokesman for Consumers Energy, did not respond to a request for comment.