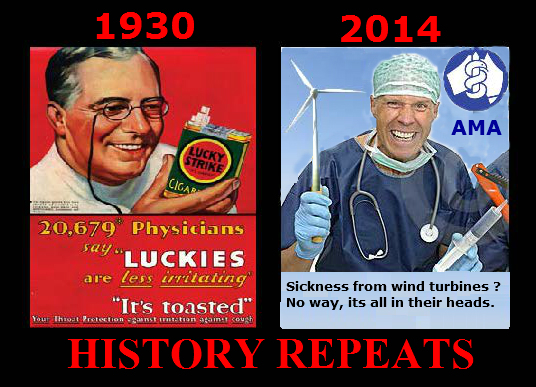 Back in the 1930’s when health concerns about cigarettes began to receive public attention, tobacco companies knew they had to take action to suppress the public’s fears about tobacco products.So the Tobacco companies asked themselves: “How can we go about reassuring the public that cigarettes are not harmful?”Their solution was to capitalized on the public’s trust of doctors in order to quell concerns about the dangers of smoking.

During the 1920s, Lucky Strike was the first to use the image of a physician in its advertisements with the message “20,679 physicians say ‘Luckies are less irritating’. ”

By the mid-1930s, Philip Morris referred to “research” conducted by physicians. One ad claimed that after prescribing Philip Morris brand cigarettes to patients with irritated throats, “every case of irritation cleared completely or definitely improved.”

And today, in an example of how history repeats, with health concerns about living close to giant industrial wind turbines receives increasing public attention (as thousands of people around the world are reporting adverse health effects) Industrial Wind Turbine Lobbyists have have taken a leaf of the Tobacco Lobby’s past tactics, by enlisting doctors to deem their products don’t harm people.

Today we even have the Australian Medical Association violating their Hippocratic oath, by issuing statements parroting the lines of the wind lobbyists, dismissing all the reports of adverse health effects of people falling ill that live near wind turbines and implying their illness in all in their heads.

It took until around 30 years, until the 1960’s that the adverse health effects of Tabacco were finally fully acknowledged by the medical fraternity – let’s hope those those suffering and living near industrial wind turbines don’t have to wait as long.