“This family was out of time”: Sheffield family resettled with help 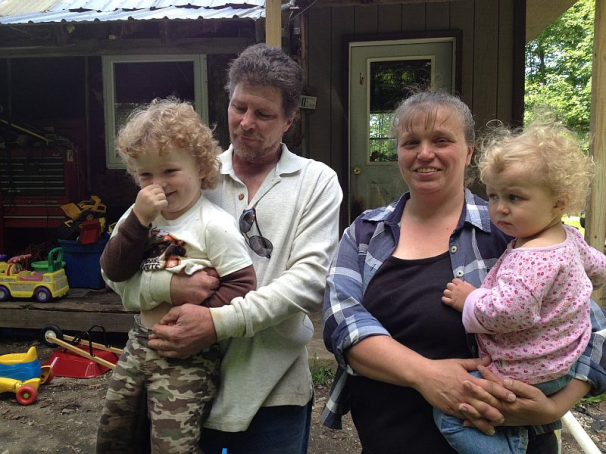 Luann and Steve Therrien had a busier Christmas than most people this year — and maybe a better one.

After living in the shadow of the 16 industrial turbines at the Sheffield wind site near their modest year-round home, a former camp that has been in Steve’s family since the 1970s, the family has been relocated with help from supporters of the anti-wind cause to a mobile home in Derby.

Over the last three years since the turbines went online, the Therriens — the poster family for the wind movement — say they have been feeling sicker.

The new home came with a to-do list that some worried might not be ready by winter: heat, electricity, a refrigerator, front steps and skirting to keep out the cold winter air.

Just a few days ago, with Christmas within days, the family suffered a vehicle fire that destroyed their van. As a result, they lost their young children’s car seats. A vehicle and car seats were added to their list of necessities.

The fire was not arson, Luann said, but the Vermont State Police still investigated. The family has enemies because of its continued, public outcry — including testifying at the State House — about how the wind project has impacted their health and the health of their children, Seager, 5, and Baily, who turns 3 next month.

People are upset, Luann said. They hear it often and with a certain reciprocity of vigor.

The owners of the wind project, First Wind of Boston, have not helped the Therriens. Help has come from many of the family’s supporters — from people in Sheffield to the Danby-based Vermonters for a Clean Environment.

VCE executive director Annette Smith dipped into inheritance funds her parents left her to purchase the used trailer for the couple, saying she feared for the Therriens’ lives while trying to survive another winter on the mountain.

“This family was out of time,” she said.

At the home in Sheffield earlier last week, Luann was in good spirits, grateful her family was moving on. But she said she was sad to be walking away from the quiet life the Therriens had enjoyed on their 50-acre property before the wind project came along. Even on the market, no one has come to see the property up for sale.

While their land is near the interstate, Luann said “it’s nowhere near the same as dealing with the turbines. We would sit outside and have bonfires all the time and I’d be out playing with Seager (before the turbines). … I haven’t even wanted to be outside (since they went up).”

Ironically, the couple’s home was off the grid. They were not opposed when talk of a big wind project started in Sheffield.

“We thought, ‘It’s wind, how bad can it be?’” Luann said of how wind dovetailed with their existing principles.

When a petition against the wind project circulated, “all my friends were signing it, so I said, ‘OK, I’ll sign it.’” But that was the only protest the couple made at that time — a signature.

Until Dec. 22, they lived less than a mile from one of the turbines, within a mile of five more. Each of the 16 turbines are taller than 500 feet and within two miles of their home.

“We’re the only full-time resident this close,” Luann said, noting most of the other dwellings in that range are camps. They never imagined they would be able to see or hear them. They were wrong, she said.

Ultimately, with VCE’s help, the Therriens’ former home will be turned into a motel of sorts. Guests will be educated on the effects of living near an industrial wind project site, said Smith.

“We are going to set it up as the First Wind Motel, that is our plan, and people can come up and experience it firsthand,” said Luann. A minimum stay of several nights will be required so the experience is meaningful, said Smith, adding that the same idea is being discussed near a wind project in another state.

Smith said, “Someone will be staying at the house in Sheffield after the Therrien family leaves.”

The family has sought help from the town of Sheffield, which takes in more than a half-million dollars in payments for hosting the wind project each year for 20 years, and from First Wind. The Therriens had been hoping for financial help to relocate, but none has come.

Officials at the town and state say tests required by the state Public Service Board, which approved the wind project, show the industrial project is well within noise standards established for its operation. They dispute the Therriens’ claims.

“The Sheffield project has undergone extensive sound testing by private and state experts and it has been deemed to be in compliance with state regulations,” said John Lamontagne, spokesman for First Wind in Boston. “We wish the Therriens well in their new home.”

Luann said First Wind offered them $45,000 for the two acres their home sits on as well as a non-disclosure agreement.

“We still think they should buy us out,” she said. “We’re abandoning our land. We’ve gone into major debt so we can get out of here.”

Luann said she remembers the first time she realized the turbines were not going to be good neighbors. It was October, 2011, and they had put up with months of construction on their road and not said anything.

“It was right off … I know it was a foggy morning, and Steve got up to go to work and he stepped outside, and he was like, ‘Oh my God, this is not good, they are so loud.’”

Steve Therrien, a former truck mechanic driver who had a garbage route in the Barre area but now has trouble feeling well enough to drive said, “We gotta just move forward. We can only help ourselves at this point.”

“I cannot tell from day to day how I’m going to feel, and how do you look at your employer and say, ‘I am going to be two hours late … it’s nerve-wracking to drive,” he said.

Of having to move, he said they had no choice.

In a letter sent to state officials Dec. 1, Smith will receive rent from the state on the trailer she bought as the family is on public assistance and unable to work due to their health issues.

Dr. Sandy Reider, a Northeast Kingdom doctor who has gone on record voicing concerns about the effects of wind, testified to the health of the couple.

“I have seen both Steve and Luann Therrien in my office for complaints that are most certainly related to living in close proximity to the Sheffield wind development,” Reider said. “… Because I have seen several others that have been similarly affected since these industrial wind projects have come online, I have had a crash course in the effects of sound (including infrasound) on health.”

Reider has testified before many state panels, citing the connection between the turbines and human health effects.

“In my opinion, the Therrien family needs to abandon their current home and move, as there is no other way to mitigate the adverse health effects they are suffering from living so close to these industrial turbines,” he stated, before they did move.

“It has to be done for my kids and my family,” Steve said of the family’s move to Derby. “It’s a good thing, with everybody that’s been behind us.”

The Therriens moved into their new home earlier this month. With it, they hope, a new start.

Steve said his mother gave them the lot on which they put the trailer.

The support from friends in Sheffield and other wind project families, as well as VCE, “It really picks our spirits up.”

The trailer they found was $15,000, more than they had hoped, but is in good condition and everything works. Friends dropped by with beds and even a wreath for the door.

Others donated the skirting and paid for the power; someone else paid for the steps, while another supporter brought a sofa, another brought a stuffed chair. The home came together quickly and with a great sense of community.

“The last thing I ever wanted for them was to have to live in a trailer,” Smith said of the Therriens. “The right thing to have done would have been for First Wind to have bought them out and for them to be able to buy a home of their choosing … We’re doing this for dirt cheap, and it’s nothing for First Wind to be proud of, it’s nothing for this (state) administration to be proud of. This is a family who has been completely thrown away by our state government whose policies put them in this position, and with everyone in the highest level of government knowing about their situation … These two small children and their parents have had their lives destroyed.”

But this holiday season, Steve said he is counting his blessings.

“We’re blessed. … It’s still sad that the state won’t step in and make these companies accountable for their damages. … I would say when you do business you take care of your damages, and that is your main priority. … We slipped through the cracks.”