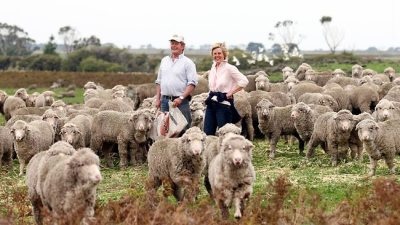 MOYNE Shire risks a huge legal bill if it ignores concerns raised in a new report on the giant Macarthur wind farm, an outspoken councillor is warning.

Cr Jim Doukas has called on the council to accept the report by acoustic expert Les Huson at its monthly meeting tomorrow.

In a notice of motion, Cr Doukas also asks councillors to address concerns listed in the report which was funded by Macarthur residents.

“I haven’t read all the report, I’ve only got a summary, but he’s found serious and obvious blatant faults in the peer reviews, even things like batteries going flat in monitoring equipment.”

He said he would be very disappointed if his motion failed to win support.

“The council is in a precarious position,” he said.

“There’s concerns of residents and we, as a council, have to listen to them. If we don’t, we leave ourselves open.

“If the councillors end up in court, the ratepayers will foot the bill.”

“It is the biggest load of garbage I’ve ever read in my life and AGL should be tied to a tree and flogged with a whip,” Cr Doukas told the council’s September meeting.

The council agreed with the report’s findings that the wind farm is complying with noise levels, but has called for further monitoring within 12 months.

Mrs Gardner, whose Marramok property neighbours the wind farm, said the testing was done within approved guidelines. “We’re wanting some openness and transparency,” she said.

She said AGL had done preconstruction noise testing in late 2010 at six properties, including Marramok, but the batteries on the monitoring devices failed in just a few days.

Further testing in early 2013, after the turbines were switched on, was carried out 35 metres from her house, rather than the guideline of five to 10 metres, she said.

Mrs Gardner said Mr Huson’s report contained “so much damming evidence” including details of flat batteries and questioned the figures in the previous tests.

She said the council was risking billions of taxpayer dollars as the responsible planning authority if it failed to act on the new findings.

“Litigation is inevitable. They have a duty of care to protect the health of residents and they are flagrantly ignoring that at their own risk.”

An AGL spokeswoman has previously told The Standard the company had already carried out more than 40,000 hours of noise monitoring at Macarthur which was “well beyond” the level required under the shire’s planning permit.