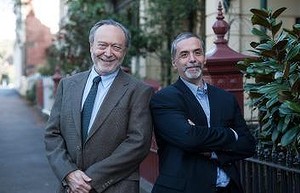 You’re home alone, in bed, with the lights off. You hear a dull thud at the other end of the house, like an intruder trying to break in. You hold your breath and your eyes widen. Your heart pounds, your ears strain. You want to get up and investigate or pick up the phone to call the police, but you can’t. You’re frozen with fear.

Behind these instantaneous physical reactions is a system designed to protect you. It begins in your middle ear, which detects the sounds and feeds them to your brain, which communicates to your nervous system that danger is imminent. This triggers physical reactions suited to the level of threat. Fortunately, for most of us, the visceral urge to fight, fly or freeze is relatively uncommon.

But for people who have experienced trauma or neglect, and those with some psychiatric disorders, everyday scenarios can switch the nervous system to high alert. So accustomed are they to danger they detect it everywhere, unable to distinguish between friend and foe.

Flooded with fear, they freeze out other people and can end up estranged from society. It can harm every aspect of life, from forging relationships, to learning, to being physically well.

American psychiatrist Stephen Porges has spent his life trying to decode the nervous system. In the process he has explored the function of the middle ear in helping us sense danger, interpret emotional meaning, express ourselves and even stay alive.

He has developed a simple but “revolutionary” therapy, called the Listening Project, which he says retunes the nervous system via the middle ear, to trigger both a sense of safety and the ability to socially engage.

Dr Porges has successfully treated children with psychiatric disorders and learning problems in the US and, in a pioneering study with the Australian Childhood Foundation, will treat Australian children affected by trauma. His supporters hope it could present a breakthrough in the way we treat and support children who have experienced abuse or neglect.

Decades of working with damaged children has lent Dr Porges, a professor of psychiatry at the University of Illinois, a mellifluous tone and an understated manner. His US work has been peer-reviewed and published in medical journals including the International Journal of Psychophysiology.

He coined the term “neuroception” to describe how the nervous system evaluates risk. It explains why a baby coos at a caregiver but cries at a stranger; why our palms might sweat when we enter a room full of noisy strangers.

This instinct for danger comes to us in part because of our middle ear, the tiny part of the body that distinguished prehistoric mammals from reptiles. The nerves in the middle ear play a crucial role in our ability not only to hear, but also, Dr Porges asserts, to express ourselves and interpret what others mean when they communicate with us.

Central to his thesis is the idea that the muscles in the middle ear allow in higher frequency sounds. This enabled our prehistoric cousins to signal to one another that it was safe to approach. These softer sounds, once communicated to the brain, help us differentiate between words and interpret the emotional content of language.

“You watch a mother with a baby, singing a lullaby,” Dr Porges says. “A lullaby is really getting into that frequency which signals safety.”

Prehistoric predators, on the other hand, projected lower frequency, less distinct sounds, like rumbles and roars. In modern times this might be a crowded room or someone shouting. For children who have been abused or neglected, or have conditions like autism spectrum or attention deficit hyperactivity disorder, Dr Porges says the middle ear can become permanently tuned to pick up predators, causing them to withdraw or react defensively.

“They can’t hear the ends of the words, because words just blur into the background. They have difficulty following verbal instructions. Then they get accused of not paying attention or of being stupid” – when in reality they’re not processing the higher frequency, comfort-inducing parts of sound.

Dr Porges’ therapy is very simple. Each child is exposed to periods of high-frequency sound; in this case, five daily, hour-long sessions. He says: “We know the acoustic frequency that makes people feel safer and calmer” – in this case, theme songs from Disney movies, with female voices. “We can amplify those prosodic [comfort-inducing] features in the music and therefore have an opportunity to trigger safety.”

He says recalibrating the child’s middle ear makes them better equipped to interpret the emotional meaning of language and to understand – and use – hand and facial gestures.

One of Dr Porges’ earliest patients in the US was Tom Clark, now 27. As a child Tom had frequent ear infections, missed language milestones and was diagnosed with infantile autism. He wouldn’t make eye contact, was upset by loud noises and was unable to socially engage.

Clark spent most of his early primary school years in remedial classes. After a week of therapy with Dr Porges in 1997, his occupational therapist was amazed to discover he was able to print letters between the lines rather than drawing each the size of the page.

He continued with the Listening Project annually until 2005, with each treatment bringing dramatic improvements: his understanding of language and social interactions improved; he began greeting others spontaneously, and by grade three he was fully integrated with regular students, with the help of an aide.

Though his autism spectrum diagnosis remains it has changed from “severe” to “high functioning”. He graduated from high school and then from a local college and recently started working.

“The Listening Project helped Tom focus and to tune in to conversations,” his father, Jack Clark, a psychologist, says. “It helped him to develop language and control his behaviour. It is completely non-invasive, based in science, and I whole-heartedly recommend it to people with issues like Tom’s.

“Prior to his therapies with Dr Porges, Tom would either withdraw or have tantrums if he was upset. After therapy, Tom’s behaviour was exemplary.” He says the therapy has had a permanent effect on Tom’s ability to cope, to socially engage and to learn. “We feel that it has made his life more meaningful to him.”

Dan Siegal is a professor of psychiatry at UCLA School of Medicine and a world-renowned expert on the nervous system and social behaviour. He describes Dr Porges’ work as “new and important” and “profoundly and revolutionarily helpful”.

He says: “If you can’t filter out an intense channel that’s coming at you, it’s going to drive you into retreat. That’s one way of understanding what a significant number of people with [autism spectrum or a trauma history] are doing – they’re retreating from social engagement because the sensory input is just too intense and floods them.”

He says by retreating, children reduce the sensory load but also reduce their ability to learn and engage. “Before you know it they’re three or four years of age, you give them a label and think it’s a primary brain problem” – rather than a physical response to an overloaded middle ear.

But not everyone is convinced. Professor Stephen O’Leary is an ear, nose and throat specialist at the University of Melbourne and the Royal Eye and Ear Hospital in Melbourne. While he says Dr Porges’ US research demonstrate improvements in the way children with auditory hypersensitivity responded to sound, he expresses concerns about its theoretical basis, describing the idea of retuning the middle ear as “exceptionally tenuous”.

“What we can take from the study is, if you amplify the frequency of the human voice, the kids in this study did seem to be less averse to sound. You can conclude that from the limited evidence available. That’s a fair interpretation.

“[Dr Porges’ theory] is plausible, but plausibility doesn’t equate to the actual explanation for what’s going on. There may be other, perfectly reasonable explanations. It might be because [the sound] is more human-like so that it makes the child relax, and for other psychological reasons they’re not as averse to sound in the future because they’ve learnt how to listen.”

But support workers like Angela Weller have high hopes for the therapy. Weller is the manager of child trauma services in Victoria for the Australian Childhood Foundation, a national non-profit agency that provides counselling and support services for abused children.

She and her staff work with children who have experienced family violence, sexual assault and who display problem sexual behaviour. She says traumatised children can present similarly to children like Tom Clark.

They usually have problems with concentration and self-control; they can be agitated, angry, or on the attack – “those strong defensive responses to not feeling safe in the world”. They can also shut down.

“They seem not present, not able to connect or be part of the world in the way that kids need to be.”

Like autistic children, too, the children that Weller works with can be hypersensitive to sound and light. “They will jump if there’s a big sound outside the room. They’ll notice the sound of the air-conditioner … they will feel frightened of things that you might not expect them to because of the vigilance in their system.”

Joe Tucci, chief executive of the foundation, says it’s common for children who have experienced trauma to struggle with relationships; making and keeping friends and reading social cues.

“It’s complicated for these kids because they’re overly focused on identifying threat in a relationship because that’s what they’ve had to do to protect themselves. Their behaviour is often seen as misbehaviour, because they don’t follow rules, and they get punished for it.”

He says Dr Porges’ work sheds light on what’s “inside children rather than just interpreting the behaviour we see”.

The Australian trial will involve up to 60 children aged seven to 14. After an assessment to check for auditory hypersensitivity, they will be split into two groups: one group will receive the treatment and the other won’t.

Each group will be assessed during the intervention, after three months and again after 12 months. (The children who don’t initially receive the treatment will later be invited to participate.) If a success, the therapy could be rolled out nationally in delivery centres overseen by the foundation.

Professor O’Leary is cautiously supportive of the foundation’s trial, “since it involves listening to voices or music and giving the child attention that is beneficial to them”. But he adds, “I’d be very interested to hear what the outcome is, particularly if these children become less sensitive to sound, but I wouldn’t be convinced that the middle ear muscles have been tuned. I think that’s in the land of conjecture and requires a much better evidence base.”

Dr Siegal, too, raises questions about the long-term effectiveness of the therapy for children when they are exposed, once again, to stress. How would they be convinced “that the world is safe, when they only feel safe when they have those headphones on?” he asks.

Dr Porges acknowledges that a child’s new-found resilience can go dormant again if they get sick or are put in non-supportive environments. But the system is easily rehabilitated, he says; in some cases with just an hour of treatment.

Weller hopes the therapy will help to reshape the children’s identities. “When you’re not calm and feeling that relationships aren’t safe, it’s really hard to be a kid in the world and do the things like play and hope and dream and have fun,” she says.

“The point that Dr Porges makes, that connectedness is a biological imperative, really resonates with me. We need to feel connected to another to be able to be physically alive and well and calm in the world.”

Dr Tucci says he views the affected children’s middle ears rather like out-of-tune violins. “We’ll take that middle ear muscle and tone it; retune it, to make the human voice a song to these kids, rather than a source of terror.”

Julia May is a Melbourne writer. Twitter:@juliacmaybe