TENS of thousands of Scots may be suffering from a hidden sickness epidemic caused by wind farms, campaigners have warned. 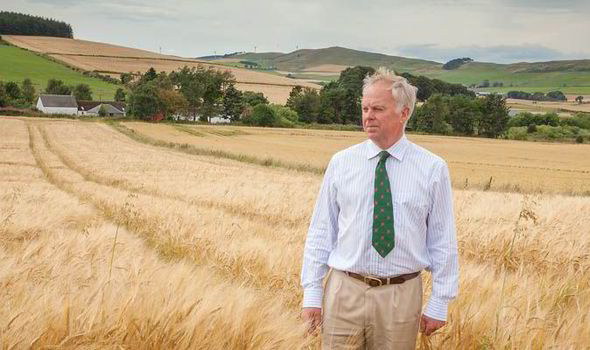 The  Sunday Express can reveal that the Scottish Government has recently commissioned a study into the potential ill effects of turbines at 10 sites across the country.More than 33,500 families live within two miles of these 10 wind farms – which represent just a fraction of the 2,300 turbines – already built north of the Border.

Hundreds of residents are now being asked to report back to Holyrood ministers about the visual impacts, and effects of noise and shadow flickers from nearby wind farms.

Campaigners fear that many people do not realise they are suffering from ailments brought on by infrasound – noise at such a low frequency that it cannot be heard but can be felt.

One such person is Andrew Vivers, an ex-Army captain who has suffered from headaches, dizziness, tinnitus, raised blood pressure and disturbed sleep since Ark Hill wind farm was built near his home in Glamis, Angus.

Mr Vivers, who served almost 10 years in the military, said the authorities had so far refused to accept the ill effects of infrasound despite it being a “known military interrogation aid and weapon”.

He said: “When white noise was disallowed they went on to infrasound. If it is directed at you, you can feel your brain or your body vibrating. With wind turbines, you don’t realise that is what’s happening to you.

“It is bonkers that infrasound low frequency noise monitoring is not included in any environmental assessments. It should be mandatory before and after turbine erection.”

He is raising concerns about an “acknowledged and unexplained increase of insomnia, dizziness and headaches in Dundee”, where two large wind turbines have been operating since 2006. Mr Vivers, 59, said all medical explanations of his own sudden health issues had been ruled out and it was more than 12 months before he was convinced of the link to the wind farm.

He said: “I was getting these headaches and dizziness and just not sleeping, but I was putting it all down to all sorts of other things. A couple of times I was walking on the hills around the house with my dogs and got a really bad dizzy spell.“I actually had to sit down for a few minutes and while I was sitting down wondering what on earth was wrong with me, I did notice the wind was coming straight from the turbines.” Mr Vivers said he has also witnessed an “incredible number” of dead hares on the moors around Ark Hill and believes they may have succumbed to “internal haemorrhaging and death” as a result of the turbines.

He added: “If this coming winter is going to be anything like the last and with the plans to build a second wind farm much closer to us, I think we’ll have to sell our home and move elsewhere.”

The 10 sites under the microscope in the new survey include one in Dunfermline, where almost 23,000 households are nearby, and Little Raith near Lochgelly, Fife, where there are nearly 9,000 households.

The others are Achany in Sutherland, Baillie near Thurso, Caithness, Dalswinton in Dumfriesshire, Drone Hill, near Coldingham, Berwickshire, Griffin in Perthshire, Hadyard Hill in Ayrshire, Neilston in Renfrewshire and West Knock, near Stuartfield, Aberdeenshire.

About 2,000 questionnaires have been sent to residents in a move that is understood to have caused tension between the Scottish Government and the renewable energy industry.

The “wind farm impacts study” is being managed by ClimateXChange, which has published information about the project online.

It says: “The research will use two sources of information: how local residents experience and react to visual, noise and shadow-flicker impacts, and how the predicted impact at the planning stage matches the impact when the wind farm is operating.

“The final report is due in autumn 2014. It will inform the Scottish Government’s approach to planning policy on renewables and good practice on managing the impact of wind farms on local residents.”

One of the contractors involved in the project is Hoare Lea Acoustics, an international firm which specialises in measuring noise and vibration from wind farms.

However, Susan Croswaithe, the UK spokeswoman for campaign group European Platform Against Windfarms, said the study would be “little more than a box ticking exercise”.

She added: “On the face of it, it does look like a step in the right direction, but can we really trust it? My issue is that it is not independent enough.

“Our website is full of examples of people not being listened to.

“We have two very large wind farms near us in Ayrshire, Arecleoch and Mark Hill – 60 turbines and 28 turbines.

“If people in my area have noticed they are feeling better at the moment but do not understand why, it may be because the turbines have been switched off while they do maintenance on the grid.”