(from page 15 of print version)

An action group is alleging that householders’ health is being put at risk, says Mark Macaskill

The march of wind turbines across Scotland is set to be legally challenged on the grounds that Scottish Ministers have failed to protect people who live in their shadow. 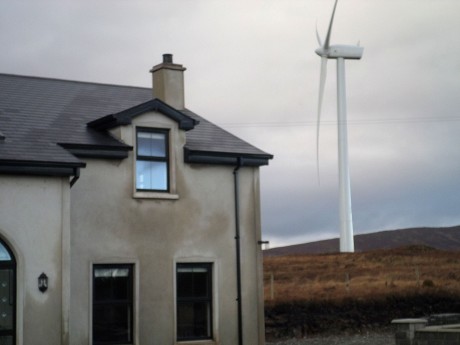 A pressure group, supported by Struan Stevenson, a former Conservative MEP, has been set up to back legal action against wind farms, including those in the planning stage, that are believed to pose a threat to public health.

Stevenson, a critic of wind farms who represented Scotland in the European parliament, believes dozens of schemes have been approved in breach of the Aarhus Convention, a European law stipulating that the public has the right to live in a healthy environment.

Some scientific studies have suggested that low-level noise emitted by giant turbines can affect people’s sleep. But the Scottish government insists there is no evidence of a “causal direct link”.

In Scotland, planning guidance suggests turbines be erected no closer than 1.2 miles (two kilometres) to residential homes, although this is not a legal requirement. Other countries, such as Australia have imposed buffer zones of up to 6.2 miles (10 kilometres).

Ayshire-based campaign group Winds of Justice argues that the Scottish Government’s failure to recognise the potential impact of wind farms on human health is a breach of the convention. It has set up a website to encourage communities who are fighting wind farms to consider legal action.

“The SNP government’s obsessions with industrial wind turbines has ridden roughshod over local democracy, where unanimous rejection of egregious planning applications are routinely called in and overturned by central government in Edinburgh,” said Stevenson.

A controversial proposal, each 410 ft high, within two miles of Straiton, a picturesque village in South Ayrshire, is seen as a likely test case. Stevenson said ministerial approval of the Dersalloch wind farm was “sneaked out” by the Scottish government on July 23, the opening day of the Commonwealth games.

There are fears that four other proposed wind farms will be approved, meaning the village would be surrounded by almost 130 giant turbines.

Fergus Ewing, the energy minister, said the Dersalloch wind farm will create about 120 jobs during construction and deliver community benefits worth more than 8.5 million pounds sterling.

“The whole idea of the website is to enable anti-wind farm campaigners to access information that will enable them to take court action.” said Susan Crosthwaite of Winds of Justice. “I think there will be a number of challenges in the UK soon. Dersalloch provides distinct possibilities for legal action.”

A spokeswoman for Ewing, said “If Mr Stevenson wants to continue with his opposition to wind farms he may wish to focus his attention on his Tory colleagues at Holyrood who profit from wind farms on their properties. Or on his UK Tory government, whose policy supports the same level of onshore wind farms as in Scotland.”