The participating residents in the survey have issued the following public statement today, to coincide with the release of the final report.

Investigation of the Acoustic Impact of Pacific Hydro’s Wind Turbines

The Acoustic Group’s Principal, Mr Steven Cooper, was commissioned by wind developer Pacific Hydro to undertake an investigation into “noise” emitted from the wind farm as a result of our long unresolved complaints about the impact of Pacific Hydro’s Cape Bridgewater wind turbines on our health, on the habitability of our homes and on the quality of our lives. Symptoms we have experienced include severe nausea, headaches, ear pressure, inability to concentrate, and severe and debilitating sleep problems, which we have endured over the six years of operation of the Cape Bridgewater wind power facility. Our health and sleep problems had previously been independently investigated and confirmed by Dr Bob Thorne, in 2012. 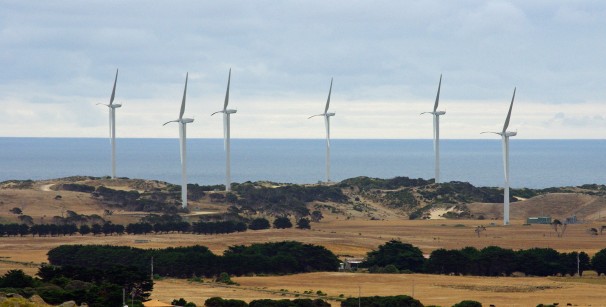 The project brief developed in conjunction with Pacific Hydro, required Mr Cooper to apply a lateral approach and to investigate any wind speed condition or noise levels that could be related to our complaints, rather than to assess noise impacts in terms of the standard dB(A) regression method. Mr Cooper was required to start with a clean slate and from our complaints work backwards to investigate.

The inclusion of “sensation” as a descriptor of an impact describes exactly what we have ‘felt’ all these years, although the screeching of the turbines when turning, together with the incessant thumping is still noise that significantly and regularly disturbs us, especially at night.

Mr Cooper’s report identifies there is a specific pattern of infrasound frequencies at the Cape Bridgewater Wind Farm when it is operating, which are not present when the turbines are shut down. These infrasound frequency patterns were measured in our homes, at levels up to 20 decibels higher than those at the Shirley Wind Farm in Wisconsin, recently declared to be a “Hazard to Human Health” by the Town Health Board.

Mr Cooper’s investigations also found correlation between the “high severity” sensations we experience as noted in our diaries and his measurements of wind turbine infrasound inside our homes. “High severity” describes the times when the symptoms or sensations are so severe that we feel we have to immediately leave our homes. These high severity impacts happen regularly for those of us who live, stay or visit our homes at Cape Bridgewater. Some of our health practitioners have advised us to permanently leave our homes in order to escape the symptoms and regain our health. Unfortunately some of us have developed permanent health problems known to result from continuing exposure to infrasound and low frequency noise so that even permanently moving away will not restore our health to its pre-wind turbine level.

The inclusion of complete shut-downs in the study clearly showed the wind farm generates specific infrasound frequencies that are directly related to the operation of the turbines.

Our diaries and the concurrent full spectrum acoustic measurements inside and outside our homes clearly demonstrate that it is the operation of the wind facility correlating with our symptoms.

The assertions made by others that our symptoms result from scaremongering (the nocebo effect) are untrue, and always have been. The inclusion of complete shut-down periods of the wind facility during the investigation reminded us of the general peace, serenity and wellbeing of our lives before the wind facility started operating.

The investigation also demonstrated that the current noise pollution guidelines operating in Victoria are useless and do not protect us from harm.

We note that direct causation of symptoms and sensations from wind turbine emissions of impulsive infrasound and low frequency noise, including sleep deprivation and body vibrations, was established thirty years ago by Dr Neil Kelley and his NASA co-researchers, in studies funded by the US Government Department of Energy.

How is it that Pacific Hydro and its acoustic consultants (Marshall Day and Sonus), and the Victorian Departments of Health and Planning did not know this? Did they not know about this research or did they knowingly proceed with installations anyway? We have long believed that the responsible authorities have a different agenda, which includes ignoring their public duties and obligations as provided for in the Health and Wellbeing Act. Are we just third class citizens whose fate it is to become collateral damage to these unsafe machines? Will no one protect us and ensure that the health of the public is protected?

It is now time to right these wrongs.

We thank Mr Cooper for his expertise, professionalism, patience and integrity.

We thank Senator John Madigan for his active interest in both our circumstances, and in this groundbreaking acoustic research project.

We thank Pacific Hydro for finally taking our complaints seriously and funding the study. We expect that they will now face the facts, difficult as this may be, and rectify the problems at Cape Bridgewater, address proper compensation for those who have been harmed and join, indeed lead, the drive for reform of regulation of wind power facilities informed by the results of this investigation.

We demand that the Victorian Government do as the USA Brown County Health Board have done in respect of the Shirley wind project in Wisconsin, and declare the Cape Bridgewater Wind Farm a Hazard to Human Health, take the necessary action required to ensure our health is no longer damaged and restore our homes and habitat to its normal state.

We also call on the Federal Government to immediately provide the promised research funding to conduct concurrent health and acoustic field research, recommended by the Australian Federal Senate in June 2011, so that National Regulations for Wind Energy Developments can be developed which do not result in irreparable harm to the health and well being of the wider rural public.

Participants in the Pacific Hydro Acoustic Survey at Cape Bridgewater.

The report can be accessed via Pacific Hydro’s website at http://www.pacifichydro.com.au/english/our-communities/communities/cape-bridgewater-acoustic-study-report/?language=en

Read the Brown County Board of Health statement at: http://waubrafoundation.org.au/2014/duke-energys-shirley-wisconsin-wind-development-hazard-human-health-declares-brown-county-board-health/

US Acoustician Robert Rand congratulates Steven Cooper on his Report