The public meeting over the proposed Gas Fired Power Station near Wellington will hear claims that the development will torment residents and ratepayers with excessive noise.

The free public meeting to be held at the Wellington Soldiers Club on Thursday will bring a number of speakers from a wide area of NSW. One of the speakers, Martin Sannikka, will showcase how bad offending noise will be to people in the town of Wellington.

The map displays the noise effects Wellington could be hit with. 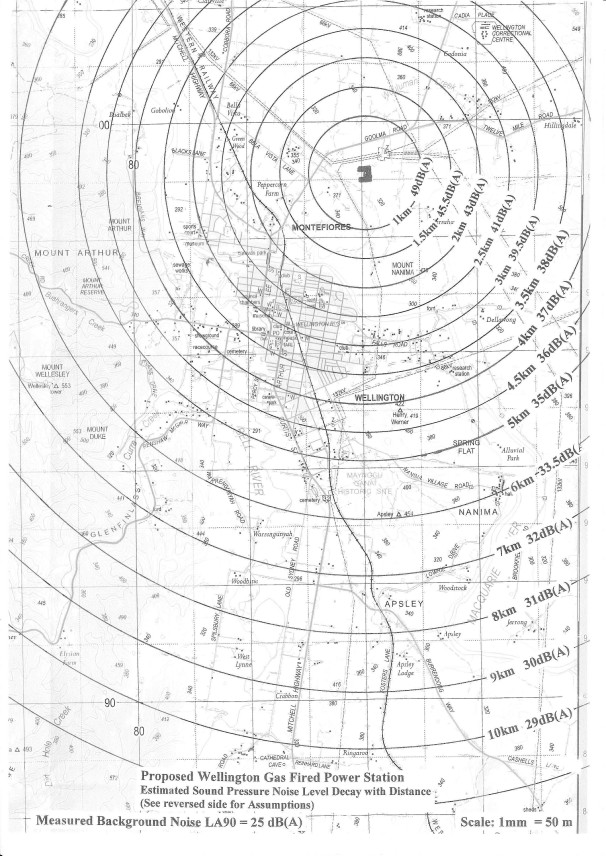 The meeting is being oganised by the NSW Farmers’ District Council and its chairman Peter Carter says many people are concerned about the gas fired power station and all sides of the story should be told.

“There is uncertainty of the effects of this gas fired power station, a loss of property values, the blight on these properties perceived or otherwise and also if approved the noise may prove a disincentive to the town, and we don’t want a noxious industry,” Mr Carter said.

Very few people would object if it was located further away from the town. “It appears the planning department and proponents have done this to suit themselves because its near the electricity sub station.

“There has been no real debate on this, just a few letters to the Times, that’s why we believe a meeting had to happen,” he said.

It’s understood the Mayor Cr Rod Buhr will talk on behalf of council first. He will be followed by invited members from ERM Power, and then those for and against the proposed extension of ERM’s proposal to build in a gas-fired power station.

ERM always said demand was low and they had no intention of moving ahead with the development unless the situation changes.

“ERM reiterate that the project will proceed only when the market conditions improve and note that as the Wellington Power Station uses gas, it would not help the gas shortage,” a spokesperson said recently.

The public meeting will begin at 7 pm.

For assumptions relating to the map above prepared by Mr Martin Sannikka please see http://waubrafoundation.org.au/resources/wellington-map-with-noise-predictions-from-power-station-by-martin-sannikka/