Dr David Lawrence, Internal Physician from Connecticut, USA has opened a crowd-sourcing site, to fund study into the impact of Industrial Wind Turbines on human health.

In launching his campaign, he said: “This is about trying to scientifically establish a cause and effect relationship of IWTs and adverse human effects.”

I am Dr. David R. Lawrence. I practice Primary Care in Internal Medicine in a small town in Northwestern Connecticut. On October 17, 2015, two Industrial Wind Turbines (IWTs) began operation as close as 1600 feet from my house. My wife became so severely affected by the turbines that we moved into our basement the next morning to shield us from Infrasound and whatever else caused the physical effects, possibly including “dirty electricity.”

Most people cannot feel the effects of IWTs. If they do, they do not often realize that something is going on or they do not know it is from the turbines. But for those who are highly sensitive-like my wife-the symptoms start almost immediately. Head pressure, posterior head pain, dizziness, loss of balance with falls, palpitations, the thumping of the blade in her chest. Sleep disturbance is prominent and has a significant adverse health impact. The clinching factor is that everything goes away when the turbines are not operational or the person leaves the area. Not just my wife, but people around the globe. I have interviewed people with similar problems in Connecticut, Massachusetts (Falmouth) and Wisconsin (Shirley Wind Farm). I have heard from people from around the globe.

The developers of wind power tell us there is not a problem. They hire “experts” who agree. Many say it is mind over matter, so called “nocebo.” They are not scientists and they are not clinicians. They cannot argue the truth, but they can hide the truth.

Physical disturbances are happening to my wife and to a substantial number of other people. What is happening to those of us who don’t feel anything and to the very young who cannot well express what they feel is to be determined. And so it is with the possible long term effects.

This is not about me or my wife. We need to leave our house for her sake. This is about trying to scientifically establish a cause and effect relationship of IWTs and adverse human effects.

“Many hands make light work.” A small contribution from a number of people is meaningful and makes a statement. I would like to think that anyone who contributes believes that there is a problem because they have a problem or know someone who does, or even because they believe in what I say. 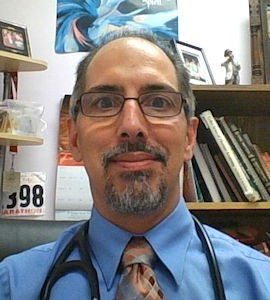 I have got to know David, and he is completely genuine, understands the global nature of the problem and the urgent need to gather evidence of direct causation, and he and his family and some of his neighbours are badly impacted already from a short duration.

He has the perfect clinical background to be able to convince his medical colleagues that there is a serious problem and I think it is well worth supporting this field research which could help to establish direct causation in someone who is clearly badly impacted.”