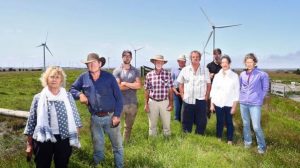 Angry residents at the Bald Hills wind farm in Gippsland that they say is damaging their health.
Picture: Aaron Francis

Australia’s first group legal action for noise and health impacts from a wind farm has been lodged in the Victoria Supreme Court against the 106 megawatt Bald Hills project in Gippsland.

A judge and jury in the coalmining centre of Morwell will be asked to hear the complaint about health and financial impacts and a failure by the wind farm’s owner to take action to stop it.

A group of 12 residents is seeking orders from the court to have the development curtailed or shut down, and for its owners to pay them compensation.

Bald Hills Wind Farm is expected to lodge its defence next month, with a directions hearing due in April. A trial could take place later this year.

The complainants are from four properties — the Fairbrother, Jelbart, Uren and Zakula residences. The group’s statement of claim says the wind farm has caused them “to experience great discomfort, distress, inconvenience, disturbance and upset including headaches, earaches, neck aches, tinnitus, ­unpleasant pulsing sensations, ­disturbed sleep, stress and annoyance, and have rendered the affected properties unhealthy and uncomfortable to live and work in”.

They also claim the value of their properties has been affected by the wind farm.

The noise from the wind farm has “caused a substantial and unreasonable interference with the use and enjoyment of the affected properties”, the statement says.

According to the company website, the Bald Hills project has 52 turbines and produces 380,000MW/h of electricity a year.

It was developed by Mitsui & Co and sold to Australian Renewables Income Fund in 2017.

A lawyer for the residents, ­Dominica Sophia Tannock from DST Legal, said the action was against the current owner.

Bald Hills Wind Farm has ­advised the Supreme Court that it has appointed Allens Lawyers for its defence.

The case is listed in the circuit list at Morwell, which has big coal and fossil fuel developments.

Ms Tannock said the applicants had asked for the matter to be heard by a judge and jury.

A company spokesman said: “Bald Hills Wind Farm will be vigorously defending the claim, however it will not be providing any ongoing commentary on the matter as it is before the court.”

The statement of claim says Bald Hills Wind Farm has breached, and is continuing to breach, its duty of care to each of the plaintiffs. It also says it has been made aware of the impact the wind farm has been having on its neighbours since at least September 2018.

South Gippsland Shire Council engaged an expert to assess the noise from the wind farm.

Last March, planning expert Paul Connor QC told the council there was sufficient evidence of a nuisance affecting the Fair­brother, Jelbart, Uren and Zakula residences. The council told the company last March that the wind farm was affecting the nearby families.

In response, the company applied to amend the permit and the rules applying to noise at night.

The claimants are seeking declarations that Bald Hills Wind Farm has failed to comply with its permit. They want an injunction to restrain the wind farm from continuing the nuisance, or else provide equitable compensation.

The claim also calls for an ­injunction requiring the company to comply with the permit. And the residents are seeking damages, ­aggravated and exemplary damages, interest and costs.