On behalf of the many people around the world, suffering acute and chronic health damage from living near wind turbines and other emitters of infrasound, low frequency noise and vibration, the Waubra Foundation demands that relevant authorities initiate:

The noise monitoring must be performed by accredited acousticians demonstrably independent of the noise polluting industry, approved by the sufferers, and in a manner that will avoid any deliberate manipulation of turbine operation or other noise polluting operations to reduce the acoustic emissions during testing. The results (including all the raw data and associated sound files) must be made available to all parties. 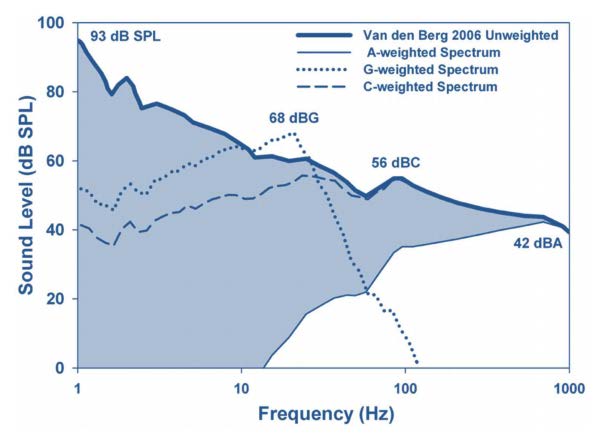 The figure above clearly demonstrates why using a dBA filter will not measure the total amount of sound energy present, (represented by the area under the solid thick blue line with the descriptor “Van den Berg 2006 Unweighted”) in the case of emissions from wind turbines. The blue shaded area represents the total wind turbine sound energy present, but not measured, by using dBA.

The figure above came from the following journal article:

The Rationale for These Demands

The plight of people made ill by wind turbine and other sources of infrasound, low frequency and vibration acoustic pollution has been universally ignored by their respective governments.

The current noise assessment practices and standards are incompetent and unacceptable, and must be changed to include full spectrum acoustic monitoring inside and outside homes and workplaces as a matter of urgency.