Interview with Trish Godfrey, Noel and Rod Dean at Waubra as well as Ballarat University scientist Graham Hood, Local Councillor David Clark, and Acciona’s Brett Thomas. Acciona subsequently bought out Victor and Trish Godfrey, and silenced them from speaking out any more about their health problems with a binding non disclosure clause in their property purchase agreement. 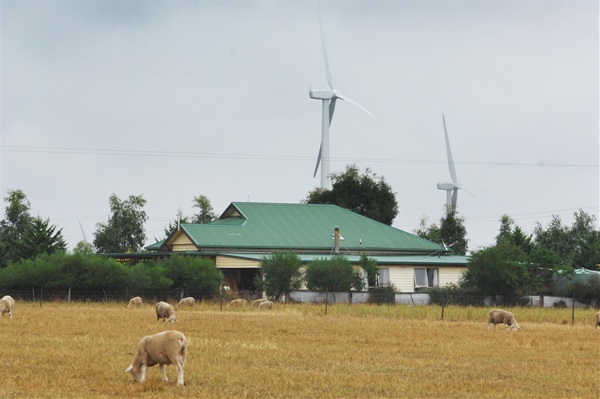 JOSEPHINE CAFAGNA, PRESENTER: Wind farms may be good for the environment, but are they good for people living right next to them? Farmers living near Australia’s biggest wind farm in Waubra in north western Victoria claim it’s making them sick. But the State Government and the wind farm company say there’s no evidence to prove the turbines are the cause of the problem. Cheryl Hall reports.

TRISH GODFREY, WAUBRA RESIDENT: Basically, the best way I can describe it is that you feel that you’ve got motion sickness, but it’s not just for a little while, it’s all the time in varying degrees, depending on how much you’re getting blasted. Today is particularly bad. It feels like my head is in a vice. I can’t remember last night that I had a full night’s sleep. Usually we wake up at least five or six times during the night.

CHERYL HALL, REPORTER: Trish Godfrey says life on her 10 acre property has become unbearable since Australia’s biggest wind farm began operating on her doorstep three months ago. 128 turbines, some of them within 800 metres of her house, run 24 hours a day.

How certain are you that this is all caused by the turbines?

TRISH GODFREY: Well, as certain as you can be that your common sense tells you. We’ve been living here nine years. I’ve never had this before the turbines had been put up, and now I’ve got this.

CHERYL HALL: Noel Dean used to live near Trish Godfrey, but he’s moved off the farm he’s had at Waubra for nearly 40 years.

NOEL DEAN, WAUBRA FARMER: We can’t live there or can’t work the farm. We’ve got about 330 hectares where I can’t work. Rod works there under sufferance. Wake up with headaches, we feel ill. So we just moved to Ballarat to get away from it.

ROD DEAN, WAUBRA FARMER: We had to go out there to feed cattle. You sorta have to go; can’t do much about it.

CHERYL HALL: And what happens when you go out there?

ROD DEAN: I end up with sore ears.

CHERYL HALL: What makes your place so badly affected?

NOEL DEAN: It’s in the bottom of a gully and it’s in a direct line between the four lots of towers. It sorta crosses over the middle there and we sort of – it just all collects in one spot there, apparently. There seems to be hotspots.

CHERYL HALL: Graeme Hood from Ballarat University’s Engineering Department is looking for those so called hotspots. This week, he set up monitoring equipment on Trish Godfrey’s property.

GRAEME HOOD, BALLARAT UNI. LECTURER: What we’re really looking for is the infrasound, that is the low frequency sound and I guess the noise that we don’t hear. The equipment we have, we have a sound level meter, fairly – a very good and expensive sound level meter, which will allow us to break that – the sound that we get up into its component frequencies. One set of data which was supposedly came from Noel Dean’s home, the signals were quite low, but that was using an A-level weighting, which we’ve tried to explain to a lot of people’s not appropriate in this case if the problem is in fact coming from low frequency sounds.

BRETT THOMAS, ACCIONA: We’d be happy to look at his data and I think there’s probably a fair chance that we’re not testing the same thing. We’re using international experts that are specialist in acoustic engineering, and I think Graeme is someone that’s a scientist collecting data and in his admission, he doesn’t know what to do with it.

CHERYL HALL: Energy company Acciona is adamant its wind farms have nothing to do with any health problems.

CHERYL HALL: Are you saying they’re not genuine?

BRETT THOMAS: I’m saying they haven’t given us any information. They’ve made claims; we’ve done our own technical studies using experts that show that it isn’t a problem.

CHERYL HALL: Trish Godfrey and Noel Dean are not alone in experiencing problems. Several other families living near here also report headaches and sleep problems. But it’s not clear why some people seem to be affected and others aren’t.

COUNCILLOR DAVID CLARK, WAUBRA WINDFARM REFERENCE GROUP: No, we’ve had no effects at all at this stage on the health of our family, and there’s four of us here. Other people in similar situations to the Dean’s, they have concerns, but they don’t have health issues.

CHERYL HALL: David Clark is a local councilor and a member of the Windfarm Reference Group. He lives even closer to the turbines than Trish Godfrey or Noel Dean.

DAVID CLARK: There’s no doubt that Trish Godfrey has got an issue. I’ve met with her several times and she really has got an issue that someone needs to help her with. But I think it’s a combination of the actual what’s being produced by the wind farm and the actual physical health of the individuals.

CHERYL HALL: Graeme Hood will spend the next few weeks monitoring the Waubra wind farm. The Health Department has already asked him for his data.

GRAEME HOOD: Well, I see people are having problems. I mean, that’s why we’re here right now. This, to me, the infrasound argument here is shaping up similar to that of the “smoking doesn’t cause lung cancer”. Everybody knew for many years that it did, but scientifically no-one ever had the proof.

CHERYL HALL: Nearly half of the 266 turbines now operating in Victoria are here in Waubra, but 850 more turbines have been approved around the state and there are applications for another 900. They’re being approved under a standard developed in New Zealand, one that doesn’t measure low frequency noise.

CHERYL HALL: Trish Godfrey wants Acciona to buy her out. The company has agreed to meet her, but says it doesn’t believe she’s entitled to compensation.

TRISH GODFREY: It’s like they’ve put us – we’re the lab rats and they’ve put us in the middle of their experiment and saying, “See how you get on with that.”

NOEL DEAN: All they have to do is shut the things off and test ‘em, find out what’s goin’ on. I don’t want to sell the property, I just want to be able to farm it without gettin’ ill. I didn’t work the last 40 years to build up a farm and turn around and not be able to work it.