The Foundation’s CEO, Sarah Laurie, Bachelor Medicine, Bachelor Surgery (Flinders University) was invited by the President of the ASA, and the Director of Acoustics Standards Dr Paul Schomer to make a presentation at the Acoustical Society of America Conference held at Pittsburgh, USA on 21 May, 2015, and to attend a special meeting to discuss research directions and priorities.

The Acoustical Society of America (ASA) is the largest acoustic society in the world, with a broad range of views readily available at major biannual conferences, with one of the most respected scientific journals in the world. The acoustic aspects of industrial wind turbine impacts on humans, and indeed options for mitigation of that noise, are major journal and conference discussion topics.

Unfortunately the CEO was unable to attend in person, however Professor Robert McMurtry, from Canada, made the presentation on her behalf.

The following Briefing Notes were prepared as Comments for Discussion, in advance of the conference, to be used as discussion points in determining the priority directions for further wind turbine noise and health research at the special research meeting convened after the conference session on Wind Turbine Noise. They have been made publicly available at the request of health, research, and acoustic colleagues working in this area.

COMMENTS FOR RESEARCH MEETING IN PITTSBURGH,
21st May, 2015

re priority directions for wind turbine noise and health research

The following comments would have been made in person had I been able to attend this meeting in Pittsburgh. I would be delighted to discuss them further with interested parties, and hope they are useful.

What We Already Know

What is now required, urgently

Who to test / investigate?

It is my strong view that those who report the most serious symptoms and those with the longest chronic exposures who report symptoms and sensations, must be the priority to investigate, to determine exposure doses at which they are demonstrating a physiological response. The priority must be to investigate the sleep disturbance first, because of the overwhelming importance of sleep for the maintenance of good physical and mental health. Children should not be excluded from observation of the impacts on them – indeed they are a priority to protect, especially children with special needs including neurodevelopmental issues, and conditions such as epilepsy where sleep disturbance could significantly increase the risk of seizures. Wind turbine host families should be offered the opportunity to be involved in such research, and nondisclosure clauses in any agreements with developers must be declared null and void so they can participate in such research.

In my view it is not a priority to investigate people who do not report an adverse impact. That will not tell us anything new and is a waste of precious resources – we already know that some people are not affected at doses where others are severely adversely impacted, because this is reported by families all the time, and we already have some clues as to who is susceptible, thanks to Dr Pierpont’s research and the research of others including Dallos (size of the helicotrema plays a part in sensitivity to LFN). So too does certain medication – eg narcotic analgesia also appears to increase sensitivity to ILFN. Nussbaum also established individual variation in 1985.

Objectives of the research

There are reports of adverse impacts thought to be from excessive ILFN at the following in Australia, for example:

In the case of jails there is the international convention against Torture to consider – jail inmates cannot escape the adverse impacts by removing themselves, and I suspect Australia is not alone in allowing the siting of ILFN emitting industrial developments not far from jails. Jail cells make perfect infrasound resonators, (Kelley 1982 comments about the impacts being worse in small rooms).

Noise sources other than wind turbines:

Wind turbines are not the only sources of excessive impulsive ILFN. In Australia other locations include gas fired power stations, coal fired power stations, underground coal mine extractor fans, open cut coal mines – diesel machinery. It would be preferable to ensure that the adverse health impacts from different noise sources are investigated – the above adverse health effects are of course not confined to wind turbines.

Finally, numerous international human rights conventions and covenants generally include the proviso that member states should ensure their citizens can attain the best possible mental and physical health. It is not possible to comply with the provisions of these UN Conventions and Covenants unless noise pollution (including from infrasound and low frequency noise and vibration) is regulated so that the regulations are effective to protect health, and in particular sleep.

I hope these comments are helpful, and look forward to helping progress the research agenda by sharing the Waubra Foundation’s knowledge of the impacts and the relevant research. 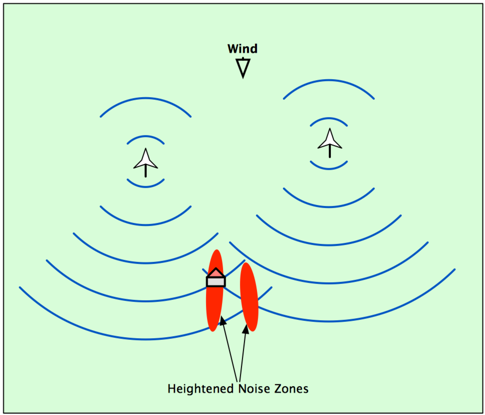 Existing evidence of direct causation of sleep deprivation, body vibration and other annoyance symptoms – the Kelley / NASA research from the 1980’s

Kelley N et al “Acoustic Noise Associated with the MOD-1 Wind Turbine: Its Source, Impact and Control” 1985 Prepared for the US Department of Energy http://waubrafoundation.org.au/resources/kelley-et-al-1985-acoustic-noise-associated-with-mod-1-wind-turbine/

Professor Geoff Leventhall’s comments to the NHMRC Workshop in June 2011 that “noise annoyance” symptoms are the same as “wind turbine syndrome” symptoms, and are a stress effect (from audible noise): http://waubrafoundation.org.au/resources/leventhall-g-comments-nhmrc-june-2011-wind-turbine-syndrome-symptoms-same-as-noise-annoyance/

Leventhall G, (assisted by Benton, Pelmear) 2003 Report for UK Department of Food and Rural Affairs: “A Review of Published Research on Low Frequency Noise and Its Effects” http://waubrafoundation.org.au/resources/review-published-research-low-frequency-noise-leventhall/

There is very little data relating specifically to the consequences of chronic exposure to wind turbines. Of the available evidence relating to chronic ILFN exposure data, the most detailed research is the body of research including clinical reports, post mortems, and animal research by the Portuguese team of scientists led by medical practitioner, occupational physician and clinical pathologist Dr Nuno Castelo Branco, and Professor Mariana Alves Pereira, physicist, biomedical engineer and environmental scientist, who together with their team have investigated and described what happens with chronic (mostly occupational) exposure to ILFN. (see http://waubrafoundation.org.au/resources/vibroacoustic-disease-biological-effects-infrasound-alves-periera-castelo-branco/ and http://waubrafoundation.org.au/resources/alves-pereira-castelo-branco-vad-need-for-new-attitude-towards-noise/ to start with.

With respect to wind turbines specifically, there is no longitudinal data, however useful clinical information can also be gleaned from some Europeans chronically exposed to ILFN from wind turbines over many years, such as from Germany http://waubrafoundation.org.au/resources/juttas-story-windwahn/ and from Portugal, presented in this video by Professor Alves Pereira: http://waubrafoundation.org.au/resources/low-frequency-noise-presentation/ .

There are also discreet population groups where there is health data detailing significantly increased rates of heart disease and cancer, and clinical histories from local residents consistent with chronic exposure to excessive ILFN (eg from a coal fired power station) with consequent sensitization to ILFN, but very little full spectrum acoustic exposure data to confirm actual exposures. However the acoustic and health data which does exist is compelling, and suggests that the few known clinical cases of ILFN related health damage are the tip of the iceberg for those communities, and that the true incidence of health damage from chronic exposure to excessive ILFN is much higher.

One such community is Lithgow in NSW, Australia, long known by locals to have a low frequency noise problem, however no full spectrum acoustic data was available until recently (The Acoustic Group Report (S Cooper) for Centennial Coal April 2015).

Health problems for the Lithgow community have previously been attributed to air and water pollution alone, (http://www.smh.com.au/environment/health-fears-for-lithgow-residents-amid-coal-boom-20100605-xlr8.html ) with noise issues seemingly ignored by the health and noise pollution regulatory authorities despite longstanding knowledge of those authorities that environmental noise could cause a range of health problems including sleep disturbance and neurophysiological stress, mental health disorders, cardiovascular disorders, children’s learning difficulties and “annoyance”. (http://waubrafoundation.org.au/resources/health-effects-environmental-noise-other-than-hearing-loss/ )

This example in Lithgow NSW Australia is indicative of the suspected under reporting related to the lack of reliable full spectrum acoustic data, health data suggesting a serious problem, and lack of awareness of the medical profession generally about the many health problems which are directly related to excessive ILFN exposure which compounds the problems for the residents.

Sensitisation to ILFN with Progressive Exposure

Noted by Kelley et al in 1985 and specifically referenced on page 199 of the following report:

Kelley N et al “Acoustic Noise Associated with the MOD-1 Wind Turbine: Its Source, Impact and Control” 1985 Prepared for the US Department of Energy http://waubrafoundation.org.au/resources/kelley-et-al-1985-acoustic-noise-associated-with-mod-1-wind-turbine/

See also the Waubra Foundation summary of the Cooper study and its implications http://waubrafoundation.org.au/resources/acoustic-engineering-investigation-at-cape-bridgewater-wind-facility/

“Coming from several towers at once, these low frequency air pressure fluctuations may synchronize and reinforce, depending on the orientation of the towers and house and the timing of the individual turbines” http://waubrafoundation.org.au/resources/dr-nina-pierpont-submission-australian-senate-inquiry/

Dr Bob Thorne’s detailed investigation at Waubra and Cape Bridgewater Wind Developments in Victoria where he found that the health indicators of people chronically exposed to wind turbines were consistently worse than hospital inpatients, a population group usually with the worst health indicator data. http://waubrafoundation.org.au/resources/thorne-r-victorian-wind-farm-review-updated-june-2014/

Field evidence of excessive noise / sleep disturbance out to 8 – 10km

Effect of Noise on Children

UN Conventions to which Australia is a signatory:

Australia is a signatory to seven international Covenants and Conventions. Six of these have a clause which states that people have

The final UN Convention is the Convention against Torture, Cruel, inhuman and degrading treatment. Sleep deprivation is explicitly mentioned as a method of torture by the UN Committee Against Torture who stated:

“The Committee against Torture (CAT) has noted that sleep deprivation used for prolonged periods constitutes a breach of the CAT, and is primarily used to break down the will of the detainee. Sleep deprivation can cause impaired memory and cognitive functioning, decreased short term memory, speech impairment, hallucinations, psychosis, lowered immunity, headaches, high blood pressure, cardiovascular disease, stress, anxiety and depression.”