Letter to the Editor re: ‘How the factoid of wind turbines causing ‘vibro-acoustic disease’ came to be ‘irrefutably demonstrated’ Response to Prof Chapman

As lead researchers in vibroacoustic disease (VAD), we have been made aware of the article by Chapman et al.[1] in which our work was greatly misrepresented and misunderstood. Correction and clarification are, therefore, required.

Chapman et al. reference a 2007 paper discussing Public health and the importance of low frequency noise (LFN), in which the LFN content of a ‘Grain Terminal home’ and a ‘Wind Turbine home’ are discussed.[2] The grain terminal (GT) case, originally presented in 2004, was first-authored by our cardiologist,[3] and the Wind Turbine (WT) case was first presented in 2007,[4] with a follow-up in 2010.[5] We stand behind the statements published in these papers.

Both families solicited our help. We did not select or procure either case, and we provided our services pro bono. Until then, our experience with LFN-induced pathology had been mostly within occupational exposures, not environmental or residential exposures.

It is not our intention herein to replicate the results of the above-mentioned studies, but some data is required to clarify to the issues at hand.

The owner of the WT-home paid an independent accredited firm for the acoustical measurements, and provided our team with the numerical information for further analyses. No commercial, financial or professional agreements (contractual or otherwise) existed between this firm and the VAD research team. Figure 1 shows acoustical data compiled by VAD researchers.

As seen in Figure 1, levels of LFN are clearly increased in the bedroom when WT are in operation. 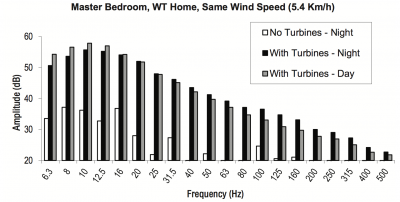 Figure 1: Data collected by an independent accredited firm, inside the Master Bedroom of the WT-home. Comparison of values at the same wind speed.[4]

Chapman et al. claimed our work was “of abject methodological quality” (p.247) because “The noise measuring equipment used to measure infrasound in the two houses was different” (p.246). However, in that paper, Alves-Pereira et al.,[2] being fully aware of that technical limitation, wrote: “In a perfect world, designed for the most efficient and accurate scientific studies, all noise assessments ought to be conducted with the same equipment and with the same procedures. This is not feasible. So, despite on-site and factory calibrations, a legitimate question will always remain: can the differences between the ILFN levels in the [GT and WT] homes (…) be due to differences in the noise measuring equipment and procedures alone? Despite this legitimate question, these data are sufficient to warrant precautionary measures”.[2]

Another criticism emerged because we “took no account of inattention and lack of energy in school children being common” (p.247).

Upon being contacted by these two families, VAD Team researchers provided non-invasive VAD screening tests. The rationale for these specific tests would require significant self-citation.

The 10-year-old residing since gestation in the GT-home disclosed “the most severe cardiovascular condition”, scoring the highest values in mitral valve leaflet thickening and pericardial thickening.[3] These echo-imaging findings had only previously been seen in older LFN-exposed workers,[6] and were entirely unexpected in a 10-year-old child.

Furthermore, this child had “suffered from asthma until the age of 1 year. At 5–8 months of age, he was medicated for reflux, and then again until he was 1 year old. At 8 months he suffered pneumonia. After the age of 1, he began to develop repeated ear infections that were not responsive to antibiotics. At age 3 he underwent ear surgery. At the age of 5, at school, he suddenly lost his vision, and was taken to the hospital where the EEG revealed a late onset epileptic seizure. Nose bleeds without an apparent cause used to be frequent, but have subsided with age. There is no history of rheumatic fever, radiation or asbestos exposure.” (In: Alves-Pereira et al.,[2] citing Araújo et al.[3])

In the WT-case, Evoked Potentials provided to the 12-year-old boy, disclosed “asymmetries in the right and left nerve conduction times, and the right I-V interlatency value was at the threshold of normal values (4.44ms). The endogenous evoked potential P300 recording occurred at 352ms (normal: 300ms)”.[4] Taken alone, these values are not relevant, but after a two-month vacation away from the WT home, the child disclosed significant improvement: 322ms.

Neurophysiological tests were provided to this child because four months after WT began operation, the parents received a letter from the child’s teacher voicing “concern for the growing difficulties of an otherwise outstanding student, (…) it seems that [the child] has lost interest, makes a lesser effort, as if he were permanently tired. In Physical Education, an abnormal amount of tiredness is also observed. Is [the child] leading a healthy life? Does he sleep sufficient hours during the night?’”[2]

The fundamental histological feature found both in LFN-exposed patients and LFN-exposed laboratory animals was also observed in the horses raised on the WT-home property: thickening of vascular walls due to proliferation of extra-cellular matrices in the absence of an inflammatory process.[5] To fully comprehend the rationale and the highly significant implications of these results, a large amount of self-citation would now be required.

Understanding the pathophysiology of LFN-induced diseases requires knowledge on cellular tensegrity architecture[7] that goes beyond the classical models of general physiopathology.[8,9] Mechanotransduction cellular signaling,[9] a relatively new concept, becomes of paramount importance because it is a major target of the LFN agent.[10] In the absence of this new cellular model, the nature of the biological response prompted by LFN exposure cannot be fully understood.

Given the complexity of this subject, difficulty in recognising the significance of our scientific findings reported over the past three decades is entirely understandable.

Unfortunately, the vast majority of studies concerning health impacts of WT on neighbouring residents do not yet provide an adequate quantification of the physical agent of disease, and are based on highly subjective questionnaires lacking clinical corroboration on relevant endpoints. This is flagrantly perpetuated by the Wind Turbine Health Impact Study, as prepared for the State of Massachusetts.[11] In our ongoing investigations, we have repeatedly pointed out the inadequacy of questionnaires as a valid measure of health effect,[12] a position shared by the Strategic Health Impact Assessment on Wind Energy Development, as prepared for the State of Oregon.[13]

We reiterate that LFN-contaminated homes are a significant public health concern, and substantial health deterioration can be observed in humans and animals dwelling without respite in LFN-rich environments. (Disclaimer: this statement cannot and should not be construed as an argument against the implementation of wind turbines.)