Victoria’s Supreme Court has ruled in favour of two Gippsland farmers who say a neighbouring wind farm has emitted unreasonable noise at their properties since 2015, in what their lawyer says is a first in Australia.

John Zakula and Noel Uren fought the Bald Hills Wind Farm for years in councils and courts, raising concern about the noise the turbines made near their homes in Tarwin Lower, about 170 kilometres south-east of Melbourne. 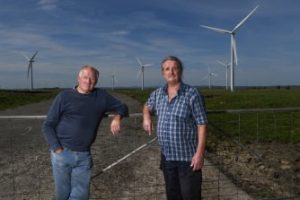 On Friday, Justice Melinda Richards ordered the wind farm operator to pay Mr Zakula and Mr Uren $168,000 and $92,000 respectively: half for noise disturbance, at $12,000 per year, and half in aggravated damages because the company’s conduct was “high-handed” towards them.

Wind farm operator Infrastructure Capital Group must also curtail its operations to stop the night-time noise disturbance at Mr Zakula’s house. If the company cannot fix the problem within three months, the noisy turbines near Mr Zakula’s house will be shut permanently at night.

The decision represents a win for individual community members amid a growing number of David-versus-Goliath cases across the country in the rapidly expanding wind farm sector.

In her judgment, Justice Richards said renewable energy was a socially valuable activity and it was in the public interest that it continue.

“However, there is not a binary choice to be made between the generation of clean energy by the wind farm, and a good night’s sleep for its neighbours,” she said.

“It should be possible to achieve both.”