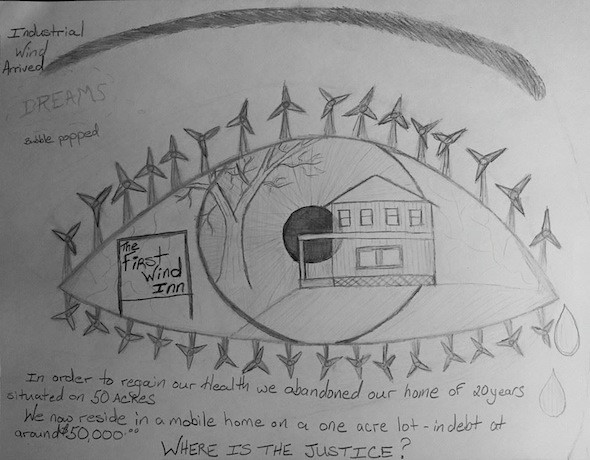 ART OF ABANDONMENT:
This art drawing illustrates the tragedy the Therrien family experienced after noise and health-related impacts
of wind turbines caused them to flee their home in Sheffield in 2014.

SHEFFIELD, Vt. — A Vermont home abandoned due to noise from local wind turbines is being turned into a research center to study the negative impacts of industrial-scale wind power projects.

The Therrien family property in Sheffield has been the epicenter of a debate regarding the adverse effects of wind turbines. Now it will become a dedicated research hub to study the noise, vibrations and environmental impacts of 16 418-foot-tall nearby turbines known as Vermont Wind.

“We are going to solicit universities and research institutes to conduct studies, and we are going to make the property available to them,” said Mark Whitworth, board president of Energize Vermont, an environmental group that advocates for small-scale renewable applications.

The Therriens abandoned their home in 2014 after living there for two decades because they said the sound and vibrations from the power plant were causing sleepless nights and health problems. When the property recently went up for tax sale, Energize Vermont seized the opportunity to pay off the family’s back taxes and made an agreement to use the property for research purposes.

Steve Therrien, the former owner of the home, said he believes the center will provide a valuable service to all Vermonters. 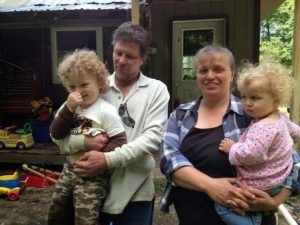 WIND POWER VICTIMS:
Steve and Luann Therrien abandoned their home in Sheffield and moved into a mobile home
in Derby to get away from 16 418-foot-tall wind turbines built near their home.

“We certainly can’t get the wind companies to do the right thing for the towns. It’s a push in the right direction, with all of the other (wind turbine) projects that they are trying to put in,” Therrien told Watchdog.

“I hate to say it, but any kind of studies or testing (by the state) has been gamed. This will hopefully level the playing field.”

Whitworth agreed that something needed to be done.

“The Therrien family abandoned their home, and we want to start to figure out why,” he said. “What are the conditions that those turbines created that could cause a family to take the extreme step of abandoning their home and property?”

Energize Vermont has named the facility the Vermont Center for Turbine Impact Studies. In addition to conducting research on the turbines’ impacts on residents, wildlife and the environment, the center’s research teams will also assess the performance of state regulators in their efforts to monitor and enforce wind turbine standards.

“The State of Vermont and the Public Service Board does not seem to be interested in doing real monitoring and real measurements,” Whitworth said. “They certainly aren’t interested in enforcing the conditions that they themselves established for these wind operations.”

Another of Vermont’s Big Wind critics, Annette Smith, director of Vermonters for a Clean Environment, said she is pleased with the new research initiative.

“It’s become abundantly clear that nothing will ever get resolved through the regulatory process,” she said. “This is going to finally be a way to gather credible information about what people are experiencing, what the noise levels are — and not just audible (noise), which is what the Public Service Board looks at, but also low frequency noise and infrasound.”

Whitworth noted that the owners of the Sheffield facility, SunEdison, a subsidiary of TerraForm Power, is bankrupt, and that the project has not met performance expectations since it was built in 2012, producing only 70 percent of developers promised.

He added that another problem complicating matters is the turbines are no longer supported by their manufacturer. As the turbines fail mechanically, getting the right replacement parts will become increasingly difficult. 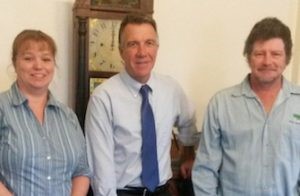 A LISTENING EAR:
Republican gubernatorial candidate Phil Scott, shown here with Luann and Steve Therrien,
is calling for a moratorium on wind development in Vermont. His Democratic challenger,
Sue Minter, says wind power must be embraced as part of Vermont’s clean energy future.

Therrien thinks the fight over wind power is going to have ramifications for Vermont’s gubernatorial election. Republican candidate Phil Scott has called for a moratorium new industrial wind projects, whereas Democrat Sue Minter has said she will not let towns have veto power over industrial wind turbine projects.

“On the Minter side, I would have to say follow the money,” Therrien said. “She doesn’t realize the ecological damages caused by these things, and nobody is going to know for a period of time. But we’ve had people go there and be like, ‘there’s no birds, there’s no deer, the wildlife is just gone.’”

“I one hundred percent believe that there is going to be a backlash on whoever is for them, and of course on Minter,” he said. “She is not going to get any votes from the Northeast Kingdom. She will probably have a hard time getting any of the rural areas like Grafton or Swanton. She is going to get all her votes from Bennington and Chittenden counties.”

Therrien said while he thinks Republican Phil Scott is better on wind, he would still like to hear more from him on the issue.

“Phil Scott, I don’t think he’s strong enough on curtailing these things, but he’s a better shot than Minter. I believe Phil wants to put a moratorium on them, but he didn’t say that he wants to completely stop them.”

“From everything that I’ve read about Sue Minter, she is interested in doubling down on Shumlin’s agenda,” he said, “and not just on issues related to renewable energy.”