The request to modify the Capital II wind farm by increasing rotor blade length should be rejected on at least three grounds: noise impact; visual impact; and impact on avifauna. The proposal is misleading and/or totally inadequate in its advice about the effect of the proposal on each of those aspects.

In its application to extend blade length, Infigen includes the claim

“Approval of this modification will have no impact on the Proponents ability to comply with the noise related conditions of consent.”

This assertion is based on one statement inconsistent with the facts and on one very important omission. It is contradicted by research evidence that clearly demonstrates a positive correlation between rotor diameter and noise levels, and it ignores the impact of the proposal on the ratio of interturbine separation distance to rotor diameter and the consequences for sound generation from a wind farm.

“provided analysis which includes examples that clearly show there is no direct correlation between increased blade length and increased noise levels.”

This is rather like the statement made by Mr Griffin in a letter to Mr Neville Osborne in relation to Infigen’s earlier request to increase the approved capacity of wind turbines from 3MW to 3.5MW:

“there is no relationship between WTG generating capacity and noise”

Mr Griffin then went on to provide 3 examples which he purported demonstrated the non existence of such a relationship. The department approved the requested modification and quoted Mr Griffin’s fallacious examples to demonstrate there would be no adverse noise impact.

In 2011, Moller and Pedersen published a paper based on measurement of multiple turbines which showed

“both LWA and LWALF increase with increasing turbine size”

“the apparent sound power increases more than proportionally to the nominal electric power. Thus, to the extent that turbines follow the trend of the regression line, a turbine of double size emits more than double the sound power.”

They showed that with the following regression chart, which plots sound power level against nominal electric power, showing the two to generally increase together. 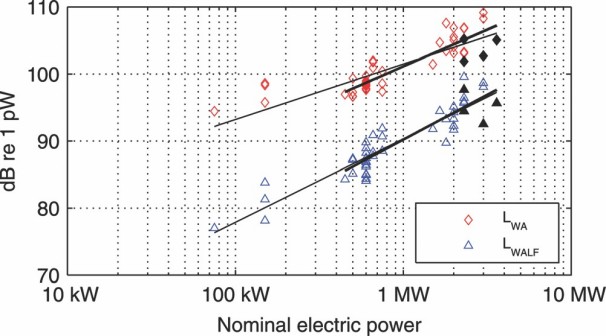 In addition, they were able to conclude from the data that:

“It is also noted that LWALF increases more steeply than LWA, meaning that the relative amount of low frequency noise increases with increasing turbine size.”

and it is well established that low frequency noise propagates further than higher frequencies thereby affecting a larger group of residents. So aside from the simple db increase in noise emission likely to ocur due to increasing the nominal generation power requested in modification 1, that change is likely to cause wider propagation and impact due to the greater low frequency proportion in the emitted spectrum. Infigen failed to mention this in their application.

So far as the power-noise relationship is concerned, Delta, a manufacturer of wind turbines, even admits on their website:

Contrary to the most recent claims by Mr Griffin, the positive correlation between rotor diameter and noise levels is well established and has been for some years. 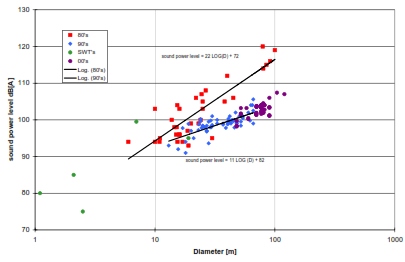 They demonstrated the relationship in the chart above. The chart shows the correlation between sound power level, in db(A), (vertical axis) and rotor diameter (horizontal axis). The graph includes two regression lines, one for turbines installed in the 1980s and a second for those installed in the 1990s. In both cases there is a positive (or in some terminology “direct”) correlation between WTG rotor diameter and sound levels.

It is the case that the technology introduced after the 1980s tends to generally emit less noise than earlier WTGs with the same rotor diameter. However, among the newer generation of turbines the same positive correlation exists between rotor diameter and noise levels as found in the earlier era.

The chart also includes points for turbines installed from 2000. They are coloured purple and a regression line has not been fitted for them. Examination of the chart reveals the same positive correlation between rotor diameter and sound levels for that group. Indeed the regression coefficient (ie amount of change in sound level per extra metre of diameter) appears stronger for that group than for the 1990s turbines.

In their presentation to the European Wind Energy Association’s Noise Workshop at Oxford in 2012, Stefan Oerlemans and Peter Fuglsang of Siemens AG presented the following chart: 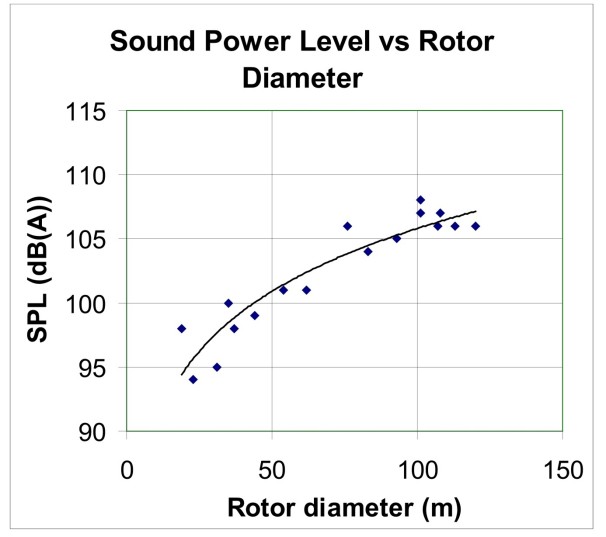 If the rotor diameter is increased to 126 metres, then the minimum spacing would be 535 metres. In that case, if the turbines stay as shown in the Modification 1 submission, then the actual interturbine distance proposed for Capital II appears to be between 37% and 47% of the spacing recommended by SEDA.

In light of the SEDA recommendations it is astounding the original application was approved. Given that it was, unless Infigen is proposing to reduce the number of turbines, and the modification request has not mentioned it, then the interturbine spacing will become substantially worse compared to SEDA’s recommendations, dropping from the range 41%-52% down to 37%-47%.

Based on SEDA’s advice and research evidence, it appears highly likely that noise pollution from the project will be exacerbated by the requested modification. The developer has not submitted any analysis to counter that expectation. Consequently, to approve the modification without such evidence would be an act clearly partial to the developer and thus consistent with what the ICAC Act identifies as corrupt conduct.