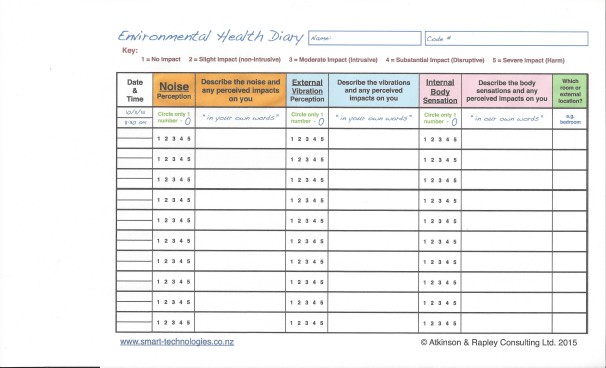 This sheet is a proforma of the Environmetal Health Diary used by Rapley and Atkinson at field research in Lithgow, NSW in December, 2015, such research funded by the Waubra Foundation. The form was developed by Rapley and Atkinson based on the original version used by acoustician Steven Cooper, who developed the diary in conjunction with the Cape Bridgewater residents for the Pacific Hydro funded Cape Bridgewater Acoustic Investigation by Mr Cooper, 2014-15. The diary was subsequently further modified by Dr Rapley and Waubra Foundation CEO Sarah Laurie, with input from Lithgow resident Theresa Grima.

Download a printable version of the Environmental Health Diary →