I appreciate the opportunity for Glenelg Shire Council to provide a submission to the Inquiry into the Social and Economic Impact of Rural Wind Farms.

This submission outlines Council’s policy in relation to rural wind farms, provides an overview of the Shire and its economic profile and discusses the benefits of the industry to the community. In addition the submission details complaints from residents living in proximity to wind farms in the Glenelg Shire.

Major industries in the region include timber, agriculture (grazing, dairy farming), commercial fishing, manufacturing (aluminium smelter and engineering) and service industries. Tourism is another activity in the region with some potential to grow.1

Employment in the Shire

There are a number of key sectors in the Glenelg LGA, and these are the Port of Portland, the Portland Aluminium Smelter, renewable energy, timber production and processing, commercial fishing, agribusiness and tourism.4 There is also a significant service sector, which is providing a range of services to residents in the LGA.

The industries of employment of male and females were substantially different. Males were mainly employed in goods producing (58.3%) or goods related industries (10.5%), with the major sectors being manufacturing (1354); agriculture, forestry and fishing (772); and transport and logistics (347). Females were mainly employed in: in-person services (2290 or 64.6%), with the major sectors being: retail (900); health care and social assistance (859); accommodation and food services (473); and education and training (512).

In all 66% of jobs were located in the Portland SLA. This reflected a number of factors: the share of the regional population in the Portland area, its role as a service centre and the concentration of manufacturing (including the smelter) and transport activity (the Port and logistics).

There are a number of key sectors in the Glenelg LGA, and these are the Port of Portland, the Portland Aluminium Smelter, renewable energy, timber production and processing, commercial fishing, agribusiness and tourism. There is also a significant service sector, which is providing a range of services to residents in the LGA.

Glenelg Shire has become a major renewable energy hub through the Portland Wind Energy Project and the wind farm activities of Pacific Hydro Limited. Keppel Prince Engineering is involved in the fabrication and maintenance of towers and turbines.

The Portland Wind Energy Project, which is currently being developed by Pacific Hydro, is constructing wind farms in Glenelg Shire in four stages. The first three stages have been completed. With the completion of all four stages, these wind farms would generate a total of up to 670 gigawatt hours per annum or the equivalent of powering 120,000 households each year.

The four stages of the Portland Wind Energy Project are as follows: 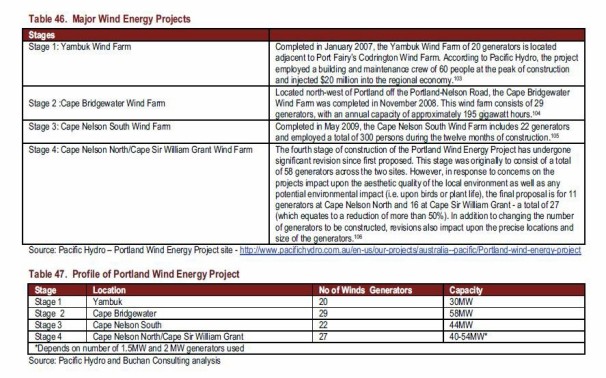 These can be both direct and indirect, from the engineers and trades people working on site through to businesses supplying products and services or local cafes making lunches for workers.

Jobs have been created in the Shire that are as a direct result of wind energy such as at Keppel Prince Engineering, Port of Portland importing and exporting wind tower components, local electricians in operations and maintenance, and ancillary economic benefits such as from accommodation, food and beverage, tourism etc.

This is in addition to rental payments for landholders hosting turbines (creating another income stream for farmers) and the grants program offered for the life of the projects which currently stands at $90K pa which goes to support local community groups in the Shire and is managed in consultation with the Shire.

Whilst there may have been other complaints lodged directly with the Wind Farm operator a check of Council’s Environmental Health Complaint’s Register indicates there have been 5 complaints against the wind farms.

Four of these complaints have been lodged from one family and have related to issues such as noise, low frequency noise and an oil leak.

The additional complaint was in relation to noise from the wind turbines.

Council has supported the construction of wind farms in the Shire and considers that they make an important contribution to the Shires economy and community through the rate revenue and community grants. In addition, Council also acknowledges that turbines can impact adversely on neighbouring residents and is of the view that careful planning is needed to ensure these adverse impacts for future developments are minimized.

Council also advises that it is not the Responsible Authority for the determination of major wind farm planning applications and as such does not hold the data relating to the impacts of wind farms. This data is held by the State government’s Department of Planning and Community Development.