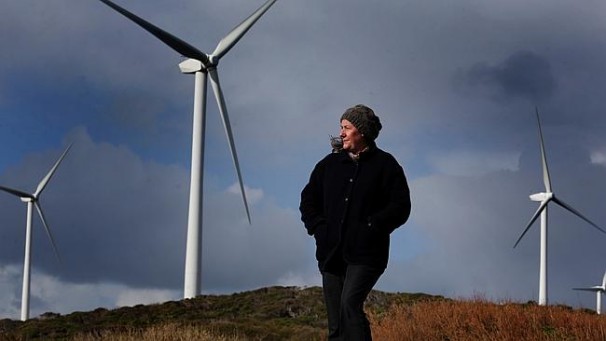 Melissa Ware at Cape Bridgewater wind farm in Victoria; she has a hearing disability but can tell from inside her home what is happening with the turbines outside. Picture: David Geraghty Source: News Corp Australia

FOR the past two months, Melissa Ware’s 150-year-old stone foundation house in the shadow of the Cape Bridgewater wind farm in South Australia has been wired to monitor sounds that cannot be heard easily by the human ear.

Ware, who is partially deaf, and two nearby families have kept a diary of the physical sensations they were experiencing at regular intervals. A scorecard was developed ranking three factors — noise, vibration and sensation — on a scale of one to five.

The research has been funded by wind farm owner Pacific Hydro and undertaken by acoustics specialist Steven Cooper, who has had a long interest in why wind turbines have produced so many health complaints that defy easy explanation.

For six years, since the wind turbines started operating at Cape Bridgewater, Ware has complained of headaches and other “pressure” effects she can attribute only to the arrival of the renewable energy project she once had supported enthusiastically.

The early results from comparing the readings from Cooper’s highly sensitive microphones and Ware’s diary notes provide uncomfortable evidence for the wind industry and some relief for Ware, told for six years that her problems were all in her head.

During the eight-week trials at Cape Bridgewater, from inside her house, Ware has been able to express with 100 per cent accuracy what is happening with the wind turbines outside.

In a report-back meeting to residents and the company, Cooper posed the theory that high sensations, including headaches and chest pains, correlated to times when the turbine blades were not efficiently aligned to the wind.

The results from recordings and residents’ diaries show that a change in power output of more than 20 per cent leads to a change in sensation for the residents.

“The main thing I get from the study is that there is a direct correlation from the noise coming out of the wind farm and the response in my body to that noise,’’ Ware says. “I have a bilateral hearing impairment, and I don’t always hear from the wind farm, but I feel it from the ground, the floor or the furniture I am sitting on.’’

Cooper has said the Pacific Hydro Cape Bridgewater development complies with existing noise guidelines. Issues of ambient noise from waves on surrounding cliffs and wind direction also are relevant in the data.

Pacific Hydro has published the minutes of the report-back meetings and Cooper’s preliminary findings but has drawn no public conclusions. Company spokesman Andrew Richards says Cooper’s work has “resulted in some interesting data” but “doesn’t necessarily provide any conclusions or outcomes”.

But Richards acknowledges there a problem. “Whatever they are experiencing is real for them,’’ he says.

University of Sydney public health specialist Simon Chapman has used the term “necebo” to argue that the complaints are psychosomatic and exacerbated by warnings from anti-wind farm groups.

In a new paper, Chapman says “The statement that ‘more than 40’ houses have been ‘abandoned’ because of wind turbines in Australia is a factoid promoted by wind farm opponents for dramatic, rhetorical impact.’’

A review by the National Health and Medical Research Council says there is “no consistent evidence that adverse health effects are caused by exposure to wind turbine noise’’.

However, it says: “While no research has directly addressed the association between infrasound from wind turbines and health effects, the possibility of such an association cannot be excluded on present evidence.’’

Concerned residents in Australia want the federal government to use Cooper’s research methodology at Cape Bridgewater as the basis for an independent study that has been promised by Industry Minister Ian Macfarlane.