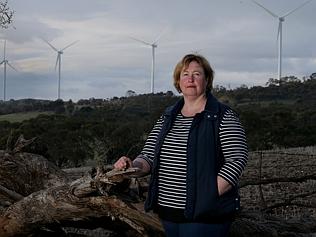 Mary Morris, at the Waterloo windfarm north of Adelaide, conducted one of the only studies accepted by the National Health and Medical Research Council. Picture: Kelly Barnes Source: News Corp Australia

Wind farms could face greater federal government scrutiny after a last-minute intervention by Tony Abbott ahead of the Senate vote on the revised ­renewable energy target today.

A spokesman for Mr Hunt confirmed last night that a letter was being prepared.

The government is hoping a written pledge will avoid amendments to the RET legislation, which is expected to be voted on in the Senate today.

The crossbench senators have raised concerns about a range of issues regarding wind-farm developments and the fact that the revised RET will strongly favour wind.

Mr Abbott has said the reduced RET was designed to limit the number of wind farms built.

A Senate inquiry into wind farms will today release an inte­rim report into its hearings, which have taken evidence from the wind industry, acoustics ­experts and residents who claim to have been affected.

The wind industry maintains claims that the technology is inefficient or poten­tially harmful to nearby residents have been thoroughly investigated and discounted. But one farm couple who has been paid $1 million to host 19 wind turbines over five years told the Senate inquiry that the noise had been unbearable.

South Australian cattle grazier Clive Gare told a hearing in Adelaide he was initially excited about hosting renewable energy, but now believed “towers should not be any closer than 5km to a dwelling”.

“If we had to buy another property it would not be within a 20km distance to a wind farm. I think that says it all,” Mr Gare said.

The wind industry has said complaints about noise impacts had not been made by people who received lucrative contracts to host them. Wind farm company AGL has paid thousands to insulate the Gare property from the noise of the wind turbines, which are as close as 800m from the house, but Mr Gare and his wife, Trina, told the inquiry they were still impacted.

Mary Morris, who conducted one of the only studies accepted by the National Health and Medical Research Council, said she would welcome any undertakings by the federal government to increase supervision.

Ms Morris became involved in the wind farms initially to support people who claimed to be affected by the Waterloo wind farm in South Australia.

In a speech to the Senate on the federal government’s compromise RET bill, Senator Leyonhjelm said the revised RET would be “no more than a wind industry support fund”.

Jacqui Lambie received support from Coalition senators for a speech in which she criticised reliance on renewable energy.

“Apart from hydro, the only way to de-carbonise energy is to move very quickly to nuclear,” she said. “And it’s about time we move to that option.”

View the original article at http://www.theaustralian.com.au/national-affairs/climate/tougher-scrutiny-on-wind-farming-after-crossbench-talks/story-e6frg6xf-1227403048162