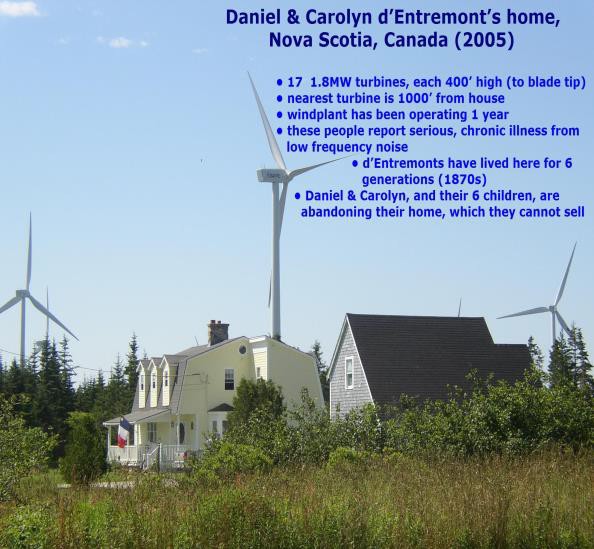 Plympton Wyoming, Ontario, Mayor Lonny Napper is astonished. “With all the available evidence from around the world about the effects of Low Frequency and Infrasound from industrial wind turbines, it amazes me that the alarms are not sounding earlier and stronger.”

With about 1,000 acres of prime land under lease for turbine development, signed up between willing hosts and developers, this council is fighting to protect its citizens’ health. A new bylaw signed and completed third reading, October 8th, 2014, sets a new and interesting precedent by mentioning and effecting fines for health impairing ILFN. ILFN is well known to be an industrial plague, now exacerbated by industrial wind turbines that plague every corner of the globe, without, as is now acknowledged widely, producing viable, reliable or “green,” energy.

In Glenmore WI, the Health Department in Brown County, almost simultaneously with the efforts of the Mayor of Plympton Wyoming and CAO, Kyle Pratt, and council, declares that the Shirley Wind Project, containing some of the largest turbines in the US, is already the site of an industrial human health hazard.

“On Monday night, the Brown County Board of Health in Wisconsin voted to declare the Shirley Wind Project to be a human health hazard. The approved motion states:

“To declare the Industrial Wind Turbines at Shirley Wind Project in the Town of Glenmore, Brown County, WI. A Human Health Hazard for all people (residents, workers, visitors, and sensitive passersby) who are exposed to Infrasound/Low Frequency Noise and other emissions potentially harmful to human health.””

While the State of Wisconsin controls siting of industrial wind, it cannot override or subjugate the “public health hazard” declaration and initiatives. A health hazard, in most jurisdictions, is a condition of high alert, where acute or chronic illness, or death, may occur due to prolonged exposure.

The hazard must be reported, and in some areas, mandated abatement must take place.

Mayor Lonny Napper seems to be of the same mind, noting that the Green Energy and Green Economy Act has taken away much democratic decision-making: his council’s bylaw aims to ensure people in his jurisdiction will be protected from turbine related ILFN and the effects that are recorded, sadly, worldwide.

“When I took an oath to protect my community, I took it very seriously,” continues Mayor Napper. “The information about what other communities are suffering, disruption, noise, degradation of precious landscapes, seriously divided communities, and to see that this possible devastation is in my full view, for my residents, something has to give.”

Mayor Napper does not understand the delay for protective measures. “People are suffering in other projects. My community is slated for multiple developers and several proposed wind projects. The time for action, and protective measures, has been with us for some time now….we can’t continue to bounce around the same arguments and with no noticeable gain in community health rights. The protection of health is first.”

Lange, of the North American Platform Against Wind Power (NA-PAW) agrees. “We have for some time now sounded the alarm for what amounts to a turbine factory health pandemic: similar effects are reported in communities worldwide. These “factories” operate without the sanction of communities. They operate without fire controls, without any regard for environmental practices, and they certainly override what is now common knowledge about noise: audible, shadow flicker, vibration and Low Frequency and Infrasound, and related air pressure fluctuations, which in combination or separately, are known to extract “torture” on unwilling people/communities.”

Both Mayor Napper and Mr. Pratt, CAO, agree that individual communities need to understand that they can use bylaw powers to protect health as required. “If Ontario communities are having so little jurisdiction to control development of massive electrical producing facilities within their boundaries, the least the council can do is to mediate the devastating health effects already reported and well known to exist, that many feel are sure to happen here.” Mr. Pratt says that he hopes the bylaw will be an example to other councils. Pratt adds, “The Town of Plympton-Wyoming Council has worked hard to protect our residents, and make sure that developers are required to deal with issues and appropriately respond to complaints and requirements from council.”

Adds Lange, “The known effects of infrasound and low frequency noise may well turn out to be the death sentence for a non-performing, entirely subsidy driven, outrage.”

Even the MOE (Ministry of Environment Ontario) admits in 2009 the complex nature of sounds and pressures:

“I went out last night for about 5 hours (got home midnight) and got some real firsthand experience with different types of noise that the turbines can create. The same turbine or groups of turbines could create 3-4 different types of noise and at different magnitudes at different times in the evening all depending on meteorological conditions, time of day, their orientation, and how they readjusted themselves (auto or by manual control – we don’t know) to wind speed and direction. Also I was able to experience firsthand wind shear conditions (no wind at ground but turbines still generating creating noise) and how that plays an important role in noise impacts.” —Oct. 29, 2009, Bill Bardswick, Director West Central Region, Ontario Ministry of Environment

ORDER TO STAND DOWN