How can we help people who have wind turbines above their homes?

Earlier this month Poland’s Commissioner for Human Rights (CHR) addressed this question to three competent Ministers, for the Environment, Infrastructure and Construction, and Health, demanding that the rights of people residing in the vicinity of wind farms be adequately protected.

The official website of Poland’s CHR explains (in English) that:

“The Commissioner’s Office receives more and more letters from citizens complaining about a deterioration of their health due to the wind turbines’ influence, as well as about the wind farm locating and building procedures. During a meeting with Dr. Bodnar, the residents of the Suwałki Region also expressed their concern about the safe placement of wind farms. The Commissioner has contacted the Minister of Environment, the Minister of Health and the Minister of Infrastructure and Construction on that matter.” (https://www.rpo.gov.pl/en/content/rights-residents-living-near-wind-farms).

The page also includes links to a report on Dr. Bodnar’s meeting with residents of the Suwalki region and to the three official intervention letters addressed to the Ministers for the Environment, Infrastructure and Construction, and Health. 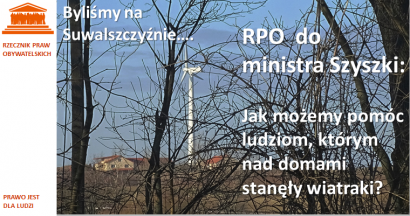 “We visited the Suwalki region…
The Ombudsman to the Environment Minister Szyszko:
How can we help people who have wind turbines above their homes?”
Source: official website of Poland’s Ombudsman

Importantly, this is the second time that a Polish Ombudsman has intervened on behalf of the people affected by the untrammelled construction of wind farms in Poland.

In August 2014 the then Commissioner for Human Rights, Professor Irena Lipowicz, wrote a letter to Polish Prime Minister demanding the introduction of proper setbacks from residences. The letter stated that “since the current legislation does not provide for the minimum distances from residential areas to be observed in the siting of wind farms, there exists a risk of violation of the constitutional rights to the protection of health and to the legal protection of human life (Articles 68 and 38, respectively of the Constitution of Poland)”.

The 2014 letter further pointed out that:

(Therefore,) the Commissioner for Human Rights asks for immediate action to be taken with a view of developing and systematizing technical norms that may afford an adequate level of protection to the health of residents living in the area adjacent to wind farms.

This letter in Polish can be found here: http://www.brpo.gov.pl/pl/content/do-prezesa-rady-ministrow-ws-uregulowania-minimalnych-odleglosci-farm-wiatrowych-od-zabudowy

That letter sent to the Prime Minister Donald Tusk by Ombudsman Lipowicz in mid-2014 did not prompt the then coalition government of the Civic Platform and the Polish Peasant Party to take any significant steps to comprehensively address the regulation of siting wind farms in Poland. As a result, in early 2016 wind farms are still being built as close as 300 metres from human dwellings.

It is important to note that both Polish Ombudsmen, Prof. Lipowicz in 2014 and Dr. Bodnar at present, are appointees of the ruling coalition that lost power in the Fall 2015 to the Law and Justice Party. In particular, the Law and Justice Party opposed the appointment of Dr Bodnar in 2015 on the grounds that his leftist views are not representative of the Polish public opinion. This shows that the issue of wind farm regulations transcends any political or ideological divisions in Poland.

It is also worth recalling that former Prime Minister Tusk is the current President-in-Office of the Council of the European Union.

A regional newspaper Współczesna.pl interviewed some of the residents whose plight prompted Ombudsman Bodnar to intervene with the government ministers. One local resident, Elzbieta Pietrolaj, whose farm is surrounded by five wind turbines, one of which is located 450 metres from her home, said: “With the slightest breeze you can’t sleep a wink because of the booming noise”. The newspaper explains that Ms Pietrolaj is ailing. “I am constantly nervous. In these conditions it is difficult to get better.” (source: http://www.wspolczesna.pl/wiadomosci/suwalki/art/9414563,wiatraki-na-suwalszczyznie-mieszkancy-wiatraki-zabraly-cisze-marzenia-i-spokoj,id,t.html).

We encourage international media to contact the office of Commissioner for Human Rights for further information.