In my letter to you dated 21 April 2015 I listed various bullet points of incorrect data by ERM. I would like to add more details under my previous bullet point 5 as shown below;-

5. The Nanima House Neutral condition assumed quieter value of 36dB(A) for MOD2 was assumed by ERM to be 7dB(A) quieter than the original noisier assumed value of 43dB(A) for MOD1, which in turn was assumed after assuming the 10 metres long barrier length, instead minimum required length of 50m, would result in assumed 8dB(A) reduction without accounting for effects relating to flanking, barrier top edge/side edge reflection and transmission coefficients so that the compliance with 35dB(A) goal would be in turn calculated backwards to comply without knowing the total sound power level at the source.

In Point 5 I accepted that MOD2 was 7dB(A) quieter than MOD1. After I had emailed the previous letter I remembered that I had already calculated for the Public Meeting that if 3 of the 4 turbines are shut down the noise level will drop only by 4.8dB(A). When I rechecked how on earth the improvement of 7dB(A) came about, I discovered that the true value according to ERM’s own data is only 5dB(A) and not 7dB(A).

In the paragraph from “ATTACHMENT B – SUMMARY OF ASSESSMENT OF MODIFICATION 1”, the Department of Planning states;-

I have tabulated the information so it is easier to understand by a layman. 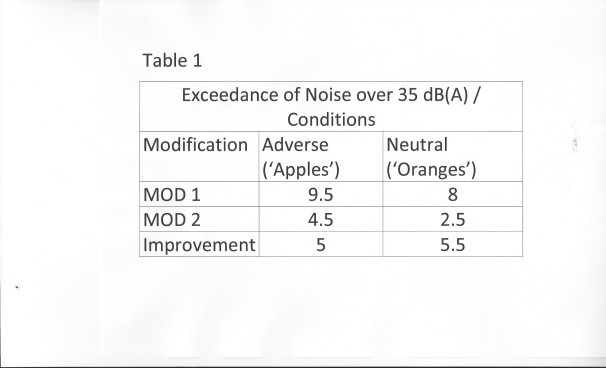 When an acoustic layman, like you, reads the above text it makes perfect sense:

For Neutral Conditions PB makes it even worse as: 8 ‘Oranges’ minus 1 ‘Banana’ = incorrect improvement of 7. ‘Bananas’ were not listed in Table 1. The 1dB(A) ‘Banana’ for Neutral condition of MOD2, instead of correct 2.5 ‘Oranges’ as per Table 1, was introduced by BP on Page 6/12 of the same document.

In my opinion ERM has tried to convince Wellington Council that the two turbine version of MOD2 is so quiet like 37.5 dB(A) and being less than the acquiring limit of 40 dB(A) for Nanima House so there are no problems. Now I have demonstrated to you that using ERM’s own incorrect numbers, (corrected by me) their new corrected value should be at least 41.5 dB(A) and there are huge problems.

I have pinpointed to you in layman’s language that all ERM’s own “fruit salad” data relating to Nanima House are wrong and too low in all documents .In addition, when the true total sound power level at the source is disclosed, it will be easily proven by an independent third party like Stephen Cooper that noise level of 43 dB(A) is too low to start with and subsequently all values referenced to it are too low and already incorrectly displayed in all relevant documents referring to MOD2, which is yet to be approved and can be stopped from being built at this site.

In my absence you had a very productive meeting with ERM on 15 April 2015. Therefore could you please email the new correct data that ERM came here to present? You promised previously to “push” ERM for the new data, so I can check its accuracy? Could you also pinpoint to me where my “produced a scenario which is simply incorrect” is wrong and what are the true values. I haven’t made any “motherhood” statements in this letter saying that ERM is simply wrong. I showed how and where ERM massaged their own numbers on purpose, incorrectly adding 3 instead of 5 and subtracting 7 instead of 5 to make it appear that their numbers stay below the limits.

Mayor Buhr, you seem to have a good rapport with the local Press in reference to incorrect data information, so please pass this significant discovery to the local Press, which ERM also supports. The local Press do not wish to publish anything from me nor retract their previous misrepresentations or even their numeric mistakes like “This site should at least 60 km from the town to mitigate the noise impact on the town,” he said. The videotaped recording of the entire Public Meeting proves that I said “At Wellington you would have to go 16km away before the gas fired power station noise is reduced to 25dB(A)”

I think that you and some Wellington Councillors mistakenly believe that the Department of Planning will act in the best interests of Wellington by moving the Power Station further away as the noise level is likely to exceed 35dB(A) in the town. At Alice Springs the noise levels exceeded 35dB(A) and the Power Station was moved 25km away from the town as ordered by the Federal Government. Regretfully, the track record for NSW Department of Planning does not show this will happen e.g. Uranquinty, Bulga etc. They only set the limits. They do not choose the site. Wellington Council does. From whose hat did you pick this one without making a single phone call to the land owners of the two alternative sites as per Mr Pittlick’s answer in the Public Meeting?

Mayor Buhr, you stopped me from turning to your “productive meeting” on 15 April 2015 by withholding the information I requested on several occasions before the meeting. After the meeting I feel that you are trying to intimidate me as the messenger through the local Press.

Fortunately my discoveries are getting through, this letter being the most damaging so far.

It is the Council’s duty to protect me and all ratepayers from a future disaster and abandonment of our homes based on the proponent’s deliberate non-disclosure of the total sound power level at the source, without it all values further away are meaningless. It simply leads to incorrect noise data by comparing ‘Apples’ with ‘Oranges’.

The assessment must be performed by an independent third party like Steven Cooper, not by me and not by the ERM paid noise people, who made the incorrect data in the first place.

The simplest solution is to select an alternative site and to treat the new neighbours with respect – this is a far cry from ERM’s track record to date.