It was a full house at the Saugeen Shores committee-of-the-whole meeting Monday evening at The Plex in Port Elgin where six victim impact statements were read by local residents who have been experiencing negative impacts since the Canadian Auto Workers’ (CAW) industrial wind turbine has been operational.

Many residents who say their worlds have been turned upside down since the wind turbine at the CAW Family Education Centre turned on, had their stories heard at Saugeen Shores town council Monday night.

And it appears as if councillors are ready to do everything they can to make the lives of these citizens return to normal.

Approximately 20 weeks ago, members of Saugeen Turbine Operation Policy (STOP) started documenting complaints from residents who have seen a dramatic shift in their physical and mental well-being since the Canadian Auto Workers’ (CAW) wind turbine in Port Elgin began operational.

Last night, before a standing room only crowd at The Plex in Port Elgin, Saugeen Shores committee-of-the-whole saw five individuals, one being STOP spokesperson Greg Schmalz, stand before councillors to read and share victim impact statements of local residents, which detailed the changes they have seen in their lives since the turbine was switched on the week of March 25, just more than five months ago.

“They are all victims without a remedy, absolutely nowhere to turn for help,” Schmalz said to council.

He asked those in attendance to take a moment and visualize their loved ones being trapped, just like the residents who braved the podium to share their stories and to think about what they expect council to do.

“My expectation of my council is to listen, discuss new pressure strategies and announce a plan of action,” Schmalz said.

He then requested that a special session take place where STOP and the town will set concrete meetings where they can talk about strategies to increase the municipal pressure on the CAW.

Saugeen Shores mayor Mike Smith said that council has to address this issue in some way and is committed to sitting down and looking at options to put pressure on the CAW.

“I think anyone who hears these stories cannot help but be moved and I would say to the CAW, ‘hear these people and speak to them,’” said Smith.

Deputy-mayor Luke Charbonneau agreed with Smith and supports working with residents to come up with suggestions.

“In my view, there is only one way to be sure that they stop hurting people is to shut the CAW turbine down,” Charbonneau said.

Schmalz, spoke on behalf of Barbara Lowe and the Kelly family who were in the audience, but were too “emotionally distraught to do it themselves.”

“The issue becomes real when they hear people who are suffering. We can talk about the theory of the issue, how it could impact people, but when it really does happen, it’s an emotional thing and I think that was demonstrated tonight,” Schmalz said.

“At the end of March 2013, I began to experience nightly sleep disturbances, pressure in my ears and some loss of hearing… on April 30, I left Port Elgin for a seven day week visit to Scotland and France. I had no problems with sleep disturbance and ear pressure while I was there,” the victim impact statement read.

The statement also read that Lowe is now ready to take steps to prove that the wind turbines are the cause of her problems.

“Five days after start up… I lay in bed with the windows closed, listening to the variable swoosh of each blade pass. My wife had night sweats, a headache and could not sleep. She moved from bed to couch and back again,” Shemilt said as he tried fighting back tears as he spoke about his family. “Two young children were wide awake, three hours after normal bedtime and one was trembling uncontrollably… we can go days without noticing any impact, (but) then it is back again.”

Shemilt continued to say that this is a political issue, council has done all that they can do within their limits, but said it is time to think outside the box.

“Right now we have a provincial government that has a mandate to install these things regardless,” he explained, adding, the only solution to fix this politically would be to remove the Liberal party in the next election. 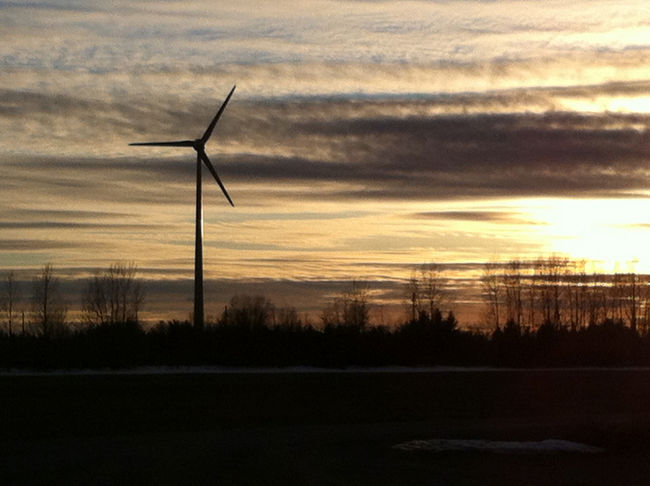 Charlie and Ann Kelly purchased their retirement home in Port Elgin in June 2012 knowing the CAW wind turbine would be turned on any day. The day it was, just like many other residents, they said their lives changed.

From constant headaches, vertigo, confusion, to sleep deprivation and tremors, the Kelly family explained in their statement that they escape their Port Elgin home for hours on end just to get relief.

“We simply cannot live in our home with the wind in the westerly direction,” the Kelly’s victim impact statement read.

Pat Murphy and Anna Milla, both 63 years of age, live 350 meters from the turbine and said they started to feel impacts one week after the start-up. Pat has had an increase in anxiety, heightened levels of tinnitus, high blood pressure and sleep deprivation. He said, Anna on the other hand, experiences low blood pressure and has fainting spells in public places.

“It’s very disturbing when all of a sudden something from outside your world comes in and impacts what you have been trying so very hard to be proactive with,” Pat said before asking council to, “please challenge the CAW before it’s too late.”

Jacquie Beale, who suffers from Meniere’s disease and tinnitus said the disease she has controlled for the past 28 years with a daily dose of medication has started to be problematic since the CAW turbine started. Beale, who lives in Saugeen Acres which is on the south side of Walmart in Port Elgin said most mornings when she is at home, she is dizzy when she gets up.

“I deserve to have a safe home, a mind not clouded with headaches, the ability to hear my husband gently call to me in the morning and to rise out of my bed without fear of fall,” said Beale, who is currently facing two additional surgeries.

She ended her deputation by repeating the chant, “shame on you CAW.”

The fourth deputation saw Kevin Hall, a resident who lives less than 550 meters from the turbine share with council and public his experience of the negative impacts the CAW turbine has had on him.

“After a night of turbine thumping, the thumping still pounds away at our heads the next day, even if the day is calm and the turbine is not spinning and headaches occur,” he explained, “the noise that comes off the turbine and across the field slams into our home is torture.”

He said he has filed many complaint forms to the CAW and has not received anything other than a number and an automated response.

Despite the headaches and sleepless nights, Hall said, he is also embarrassed to have company over when he can’t even enjoy his own backyard.

“The embarrassment increases when I explain to them that the house will get noisy and I have to apologize to them because they couldn’t sleep,” he said as his deputation came to an end.

The victims who stood before council Monday evening shared one commonality: they said their symptoms disappeared when they were away from the turbine and symptoms came back when they returned home.

Councillor Diane Huber said she encourages residents to keep sharing their stories and thanked those who did.

“Bring in all the stories… it is time… I think we’ve waited long enough and now it’s time for us to do something about it,” she said.

Councillors later approved a motion, put forward by Charbonneau, calling on the CAW to shutdown the turbine.

In the meantime, STOP will continue its grassroots activism designed to draw attention to the plight of the residents who have fought against the turbine for nearly two years now, including those who presented evidence Monday night of their worst fears of the turbine’s impact coming to fruition. From 11 a.m. until 1 p.m. Labour Day Monday, STOP invites people from all over Ontario to join them in the attempt to set a world record for having the most people stand shoulder-to-shoulder spelling the word HELP at Gobles Grove Beach.

“It is an awareness public pressure situation that I would believe that the CAW would take note,” Schmalz said.