Thank you for this opportunity to make this submission regarding the application to vary the Generation Licence of Waterloo wind farm Pty Ltd in order to construct 6 additional turbines (Vestas V117 model).

Waterloo & District Concerned Citizens Group was formed in 2009 to represent the local community in dealings with the developing wind farm. The committee consists of 6 members representing approx. 270 residents within 10km of the wind farm. Our aim has been to advocate for residents in trying to resolve ongoing issues created by the construction and operation of the wind farm. We also advocate for turbines being sited further from homes as this will alleviate many of the problems.

Unfortunately the wind farm owners and operators have not been as open and transparent as we would have liked nor willing to address complaints with the integrity and honesty that is expected of a good corporate citizen.

We feel this application to vary the Generation License of Waterloo Wind Farm Pty ltd should be refused because of Major Planning Faults and inconsistencies with standards applied to other wind farms in SA. Waterloo wind farm Pty Ltd has sited its turbines closer together than any other wind farm approved in SA. This may well be why this wind farm has generated so many complaints. The six larger turbines for Stage 2 cannot legitimately be accommodated on the site due to likely noise and shadow flicker impacts, inter-turbine spacing is too close, Safework SA /DPAC/ Statewide wind farms DPA recommendations, “Do Not Stay” zones and blade over-sail constraints are not implemented.

The application should also be refused on the grounds that the company has a history of not meeting its obligations to be open, honest and transparent in its complaint handling and relationship with neighbouring residents.

1. The company attitude has been a problem not only for the residents and WDCCG but also for the Clare & Gilbert Valley Council as evidenced by Mayor Aughey’s testimony to the SA Select Committee on Wind Farms (see Attachment 1 – Clare and Gilbert Valleys Council Experiences with Waterloo wind farm employees and management

2. Waterloo wind farm has been the subject of hundreds of ongoing complaints about audible noise, low frequency noise, infrasound and vibration despite the Operator’s claims to the contrary. Evidence for over 800 complaints in a 10 week period can be seen in the SA EPA’s Waterloo noise study weekly diary summaries. http://www.epa.sa.gov.au/environmental_info/noise/types_of_noise/wind_farms/waterloo_ wind_farm_environmental_noise_study/summaries_of_noise_diaries

3. Affidavits from some affected residents are provided at the end of the attachments.

4. The Company did act on a few complaints made very soon after the Wind farm started operating. Monitoring equipment was set up at 3 houses by Marshall Day Acoustics on behalf of the wind farm. Residents received no feedback from these complaint investigations until 18 months after the equipment was taken away. Finally when Senator Nick Xenophon made a request to the company on behalf of the residents, a brief summary of the testing arrived. At house 24, the house was “deemed compliant” even though it is clear from the graphs and information given to the resident that the noise is exceeding the guidelines when the wind speed is over 10.5 metres per second. (See attachment 3 “Comments on Compliance Testing at House 24 Waterloo wind farm 2010 – 2012”).

5. Another resident has had noise monitoring done and has repeatedly asked the company to provide the noise data for his home, but the company refuses to give him anything other than a brief summary. (email chain available on request)

6. A significant amount of acoustic investigation has taken place at the wind farm by The University of Adelaide and by private acousticians (L Huson, B Thorne, S Cooper) who have concluded that residents are disturbed by the high levels of Low Frequency Noise emitted by the turbines. The SA EPA has conducted a 10 week study focusing mainly on audible noise using dB(A) at Waterloo wind farm and concluded that the wind farm met current guidelines. WDCCG remain dissatisfied with the EPA’s investigations and conclusions and continue to advocate for the guidelines to include use of dB(Z), impacts on quality of life as well as measurement of infrasound, low frequency noise and vibration inside homes where people are trying to sleep.

7. Residents and private acousticians agree that the Sleep disturbance caused by Low Frequency noise and vibration of people’s floors, walls and buildings is more of a problem than the averaged audible noise level measured in dB(A) by the EPA and wind farm’s private acoustic consultants – Marshall Day Acoustics. Hence changes to the way wind farm noise is assessed are needed. People are not awakened by averages, but by peak levels.

8. Unfortunately SA EPA guidelines do not require Low frequency noise or vibration to be measured – unlike UK and Danish guidelines. The Waterloo people are still disturbed by the emissions despite the fact that we are told that the audible guidelines are being met. WDCCG supports further research into wind farm acoustics and the recent appointment of the National Wind Farm Commissioner and Scientific Committee.

9. Of course, these problems would not arise if the turbines were sited further away in the first place. The Stage 2 turbines are proposed as close as 1.4 km to the nearest residence despite the fact that residents 3.3 km away from the Waterloo wind farm have had to vacate their homes. Affidavits from impacted Waterloo residents who live from 1.3 to 8 km are attached to this submission.

10. The Developer is now planning to construct Stage 2 of the wind farm using a significantly larger turbine (Vestas V117) than they applied for in their 2012 Development Application. (Vestas V90)

11. No application to vary the turbine model to use V117s and layout has been received by Clare and Gilbert Valleys Council to date.

12. Noise and shadow flicker modelling provided to the Clare and Gilbert Valleys Council Development Assessment Panel for Vestas V90 turbine is not relevant or valid for the V117 turbine. V117 impacts are likely to be greater than V90 due to increased tower height, blade length and rotor diameter.

13. No updated noise prediction reports or shadow flicker reports have been provided to neighbours or the Clare Council to indicate the impact on nearby property owners.

14. V117 turbines cannot be sited using the layout provided in this Application as the turbines are sited too close together according to the Manufacturer’s specifications.

15. Vestas specifies that their turbines must not be sited less than 3 rotor diameters apart. For V117s the minimum spacing distance is 351 m apart.

16. Turbines sited less than 3 rotor diameters apart are subject to greater turbulence from neighbouring turbines. This increases the noise produced and also increases the wear and tear on the turbine leading to a shorter lifespan of components and increased risk of turbine failure.

17. Squeezing more turbines into the space will inevitably increase the noise level relative to fewer turbines just as 6 motorbikes make more noise than 4 motor bikes in the same space.

This shows a very narrow view and misrepresents the environment surrounding the turbines. It is not evident from the map provided in the Application that there are 12 houses within 2 km of the proposed stage 2 turbines.
It is not evident from the Site plan provided in the Application that the turbines are so close to the neighbouring properties belonging to the 3 families who are not stakeholders in the project and will no longer have safe or quiet enjoyment of a significant proportion of their property.

19. See map below from Energy Australia’s 2012 Development Application for Waterloo Stage 2. Figure 5-1 Planning. This gives a much more representative view of the wind farm site and surrounds and shows how unacceptably close the turbines are sited to local houses. There are 12 houses within 2 km. 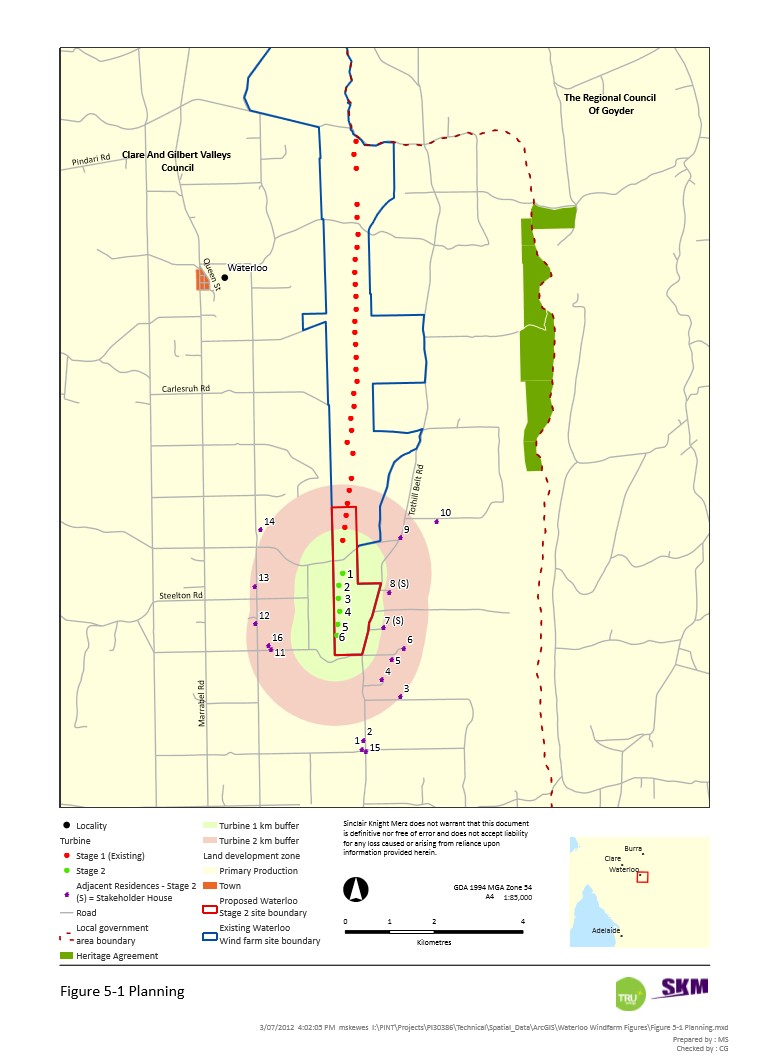 20.The setbacks to houses for the Waterloo stage 2 development are insufficient, inconsistent with and significantly less than the 2 km setbacks for the neighbouring Stony Gap wind farm (proposed by the same developer and operator of the Waterloo wind farm stage 1 – Energy Australia). Residents at Waterloo should be allowed the same 2 km setbacks as Stony Gap residents. (see Attachment 6 ENERGY AUSTRALIA letter – Accepts Goyder Council revised SGWF plan)

Turbines are sited too close to neighbours’ boundaries. Turbine blades will over-sail neighbours land. This is an unacceptable hazard according to SAFEWORK SA submission/DPAC report and the 2012 Gazetted Ministerial Wind farms DPA (see Attachment 7) because of the risk of turbine failure. “addition of policy that seeks that wind turbines be setback from dwellings, tourist accommodation and frequently visited public places (such as viewing platforms) a distance that will ensure turbine failure does not present an unacceptable risk to public safety”

21. Neighbours should not have to be subjected to whirring blades immediately overhead whilst utilising and enjoying their property.

22. Turbine workers are advised of a “Do Not Stay “area within 400 m of a turbine where they should not linger in case of turbine or blade failure or drop hazards– (see Attachment 8 – “DO NOT STAY ZONES “) Turbines should therefore be sited a minimum of 400 metres from property boundaries so that neighbours can use their whole property and not have to stay away from any area within the topple zone or drop hazard zone of a turbine.

23. Wedge Tailed Eagle nest set backs are also inconsistent with other wind farms developed in SA. Wedge Tailed Eagles nests at all other wind farm sites (except Energy Australia’s local wind farms) are given a 500 m year round buffer from turbines. Waterloo wind farm Pty ltd allows an inadequate buffer of 180 m, but only at nesting time during construction. Bird impacts are not just about “turbine strike”, disturbance is also a major factor. If given the same buffer as all other SA wind farms, turbines 5 and 6 could not be constructed as they are within 500 metres of an existing Wedge Tailed Eagle next.

24. Standard of Honesty and Integrity shown by Officers and Major Shareholders of the Applicant. Waterloo residents have found the company to be deficient in dealing with the neighbouring community. The following list describes behaviour which warrants improvement:

Not answering the phone

Not providing noise reports in a timely manner – 18 months after noise monitoring done, 2 years after the noise started and only after receiving request from Senator Nick Xenophon Making derisory and derogatory comment in the media about complainants

Not providing montages of turbine proximity to properties in a more timely manner Misrepresenting the amount of noise that the turbines would generate to the community.

The Waterloo and Districts Concerned Citizens Group requested TRUenergy the operators of the wind farm to turn the turbines off at night during sleeping hours, but they refused.

For the above reasons we submit that the proposal should not proceed in its current form and the application should be refused.

If a licence were to be granted, greater consideration must be given to ensuring that Safework SA/Wind farms Public safety DPA requirements, Planning deficiencies and inconsistencies, Manufacturers Specifications for spacing and safety requirements, noise and shadow flicker impacts are all adequately assessed and implemented.

Setbacks from houses should be a minimum of 2 km – the same as those established in the Regional Council of Goyder, recommended by DPAC and agreed to in writing and in the ERD Court by Energy Australia.

Turbines must be sited so that blades do not over-sail the neighbouring properties.

Turbines must be sited so that neighbours and their children can safely utilise their entire property without having to wear a hard hat and be inducted by the company because their property is within 400 metres of a turbine.

Other conditions we would like to see written into any licence given would include:

Please contact us if you require any further information.